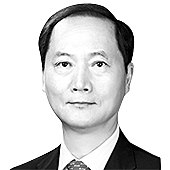 Lee Wan-kyu
The author is a lawyer.

Rule of law has evolved from “formal rule of law” to “substantial rule of law.” However, “rule by law” — the formalized rule of law — runs the risk of autocracy as there’s no problem as long as a country is governed according to the law. A typical example is Nazi Germany. Korea, too, experienced such a rule by law — dictatorships, in other words — under President Park Chung Hee’s Yushin regime and President Chun Doo Hwan’s military rule.

Substantial rule of law emerged after World War II to make up for the harmful consequences of the formal rule of law — the rule by law, in other words. The advanced rule of law places great emphasis on the constitution, while highlighting checks and balances based on substantive separation of powers.

In particular, advanced rule of law sees independence of the judiciary as a key part of the separation of powers, one that vets and controls the exercises of administrative and legislative powers. In criminal proceedings, prosecutors’ investigations and indictments are not only directly linked to court trials, but also affect them. Their investigations and indictments are aimed at realizing justice by finding the truth and delivering proper punishment to the accused — instead of simply serving as a tool to promote government policies.

The goals of the prosecution are the same as with court trials. That is why prosecutorial investigations and indictments are called a “quasi-judicial authority.” To achieve the independence of the judiciary branch, ensuring the prosecution’s independence — and political neutrality — is very important.

The most powerful tool that can be used by political powers against prosecutors is their right to appoint or dismiss prosecutors. Other developed countries addressed this problem by adopting measures to guarantee independence and fairness in the personnel affairs of the top law enforcement agency. This is exactly where Korea’s prosecutorial reform must start. True prosecutorial reform can never be achieved when political authorities try to control the prosecution by exercising power over personnel decisions. Creating a top law enforcement body blindly following orders from political authorities itself is undermining the prosecution and destroying the rule of law.

The prosecution went through many ups and downs since its establishment following Korea’s independence from Japan, as presidents had their way making personnel judgments over prosecutors. There were tough-minded prosecutors at times, but they did not last long, which is why the prosecution, to this day, has failed to build up a tough mentality.

As the saying goes, “Prosecutors can achieve political independence if three prosecutor generals risk their job in a row and stand against authorities.” In a country where the Blue House controls personnel decisions in the prosecution, a tough-minded prosecutor could never retain his or her position.

Prosecutors who worked in favor of political authorities have recently been promoted to top positions, while those who worked against them were demoted. As a result, many competent prosecutors left the law enforcement agency, and investigative teams that were in charge of digging into allegations targeting suspicious politicians were disbanded.

It is hypocritical to shout for prosecutorial reforms after making such personnel decisions.

To achieve genuine prosecutorial reforms, it is very important to block the Blue House from exerting any influence on the personnel matters of prosecutors.

I suggest we create a neutral organization that substantively assesses prosecutors. Any personnel decisions coming from the group can be presented to the justice minister — who holds the authority to make personnel recommendations to the president — or the prosecutor general — who holds the authority to present his or her opinions on personnel issues. If the president does not see anything particularly wrong with the plan, he must accept it.

What Korea needs now is a fair screening system that would help the country to embody fairness in prosecutorial personnel decisions.