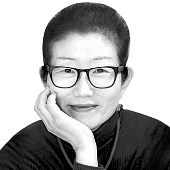 Kang Namsoon
The author is a professor of theology and religion at Brite Divinity School at Texas Christian University.


On May 28, 1975, Joe Biden — today the 2020 Democratic presidential candidate in the United States — sent a letter to Hannah Arendt, one of the most influential political philosophers of the 20th century. “Dear Miss Arendt: I read in a recent article by Tom Wicker of a paper that you read at the Boston Bicentennial Forum. As a member of the Foreign Relations Committee of the Senate, I am most interested in receiving a copy of your paper. Thank you,” he wrote.

Biden was a 32-year-old politician when he sent the letter. This short letter Biden sent to Arendt left a deep impression on me. The busy Senator was clearly proactive in learning new political views, and I wondered what part of Arendt’s paper caught Biden’s attention. Tom Wicker’s article mentioned by Biden was “The Lie and the Image” published in the New York Times on May 25, 1975. In the article, Wicker discussed “Home to Roost,” a lecture Arendt presented at the forum, in detail.

The most important foundation of a democratic society is the pursuit of truth and facts. Arendt’s paper raised critical questions on how lies and images dominated politics. A serious political crisis can be created when so-called intellectuals and experts replace truth and facts with lies and turn the public into a tool through hatred of certain people. Arendt pointed out that the truth is corroded by consistent lies, warning that lies covering up facts would bring about the most serious crisis of democracy.

Arendt’s analysis and concern in 1975 precisely applies to Korea in 2020. When intellectuals and those who claim to be experts in politics, media, education, religion and medicine have a desire for power, they distort truth through lies.

Lies are an effective tool for agitating the public and creating a public enemy. Lies distort reality and separate people from the truth. When people are agitated by repeated lies, they ultimately lose interest in the truth.

Those who wish to fulfill their desire to expand political power agitate the public by spreading lies and false facts rather than engaging in intense discussion — and intensify hatred toward certain subjects. One problem is that lies and hatred are addictive. Intellectuals and experts who agitate the public by replacing truth and facts with lies and inflammatory images become addicted to such lies. The addiction spreads to their followers like an epidemic and creates a vicious cycle.

In the age of digital media, we are living in a more dangerous time than 1975, when Arendt warned of lies and inflammatory images causing a serious crisis in democratic society. Lies and fake news on certain issues have become a part of daily life in the digital media era. Lies and false reports become more exaggerated and provocative and spread like wildfire through digital media.

Those who are addicted to lies never correct their mistakes on certain people or issues even when the truth and facts are uncovered later. When truth and facts are revealed, they distort the facts and continue to relay more lies and false information. As Arendt described, lies and fake news became a “way of life.”

It takes a great deal of patience and a complex approach to reveal truth or facts. But lies and fake news don’t require any patience or reason to think. That’s why many people become animated by lies and fake news, and not by facts or truth.

In his book “Lie Machines: How to Save Democracy from Troll Armies, Deceitful Robots, Junk News Operations, and Political Operatives,” Philip Howard, a professor of internet studies at the University of Oxford, warned that lies and fake news are a matter of life and death. We have witnessed that countless people in the Korean society chose death because of lies and false reports. They had already experienced social, if not biological, death. Even if finding facts and truth requires an extremely complicated and challenging course, a democratic society can only function when it is rooted on facts and truth. Only a society that makes fierce efforts to approach truth and facts — not lies and false reports — can make democracy mature.

Arendt concluded the paper, saying, “When the facts come home to us, let us try at least to make them welcome.” When truth and facts return to us, we should not escape to inflammatory images and lies, but accept truth and facts to correct the error of lies. It is necessary for a democratic society for all.

Protests and the presidency (KOR)