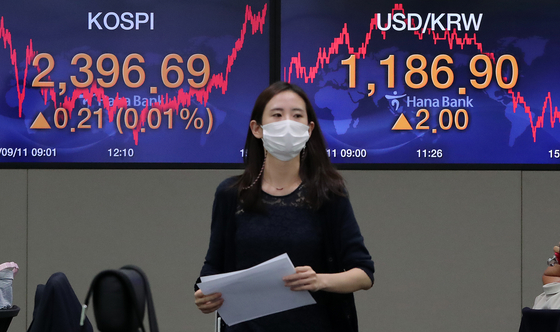 Closing Kospi is displayed on the screen of the dealing room of Hana Bank in Jung District, central Seoul, Friday. [YONHAP]


Stocks closed nearly flat on Friday amid growing valuation woes in the financial markets. The won fell against the dollar.

The Kospi's lackluster performance was largely attributed to the tech retreat and unimproved jobless benefits data from last week.

"Ample liquidity in the financial markets had been bolstering steep gains, which largely rose on future hopes, rather than value," said Kiwoom Securities' Seo Sang-young.

"The probable shift in recent investor sentiment is directing more attention to the current corporate value," he added.

Kakao Games, the game developing unit of Kakao, skyrocketed by the daily permissible maximum for the second consecutive day Friday. The gaming company spiked 29.97 percent to close at 81,100 won.

The local currency closed at 1,186.9 won against the dollar, up 2 won from the previous session's close.