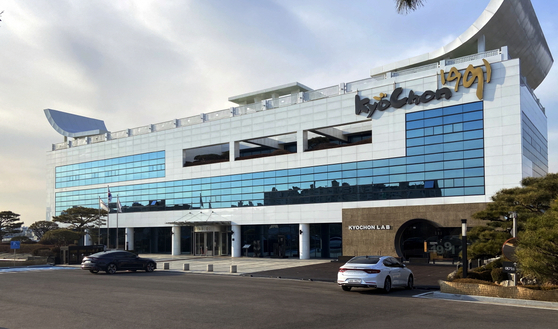 
Kyochon F&B may become the first restaurant franchise in Korea to be traded on the Kospi after passing the preliminary screening for an initial public offering (IPO), the company announced Friday.

The fried chicken franchise plans to submit a registration statement this month to financial authorities as the next step toward the IPO. The underwriter is Mirae Asset Daewoo.

Kyochon has been pushing for an IPO since March 2018. It replaced founder Kwon Won-kwang with professional CEO Hwang Hak-su in 2019 to meet global standards in terms of business management. Kwon had been leading the group for 27 years.

The company also made changes to its governance structure. It acquired all shares in two of its affiliates — BHN Bio and KnP Food — to take ownership of them as subsidiaries last year. The two companies produce the sauces and pickled radish served alongside Kyochon’s fried chicken dishes.

Kyochon acquired the companies as subsidiaries to increase transparency and dispel concerns its affiliated businesses will be used for the private interests of major shareholders and third parties, according to the company.

Established in 1991, Kyochon has been the No. 1 fried chicken franchise in Korea since 2014. It recorded 21 billion won ($1.8 million) in net profit last year, an 83 percent increase compared to the same period a year earlier. Its operating profit was 31.9 billion won.

According to 2018 data, the average sales of Kyochon’s franchise stores was 618 million won, which the company said was the highest among chicken franchises registered with the Fair Trade Commission.

“We have arrived a step closer to becoming the first franchise to list on the Kospi. Kyochon will endeavor to become a global food company, as well as put efforts into promoting mutual growth of the headquarters and franchise stores through the IPO,” said an official from Kyochon F&B.