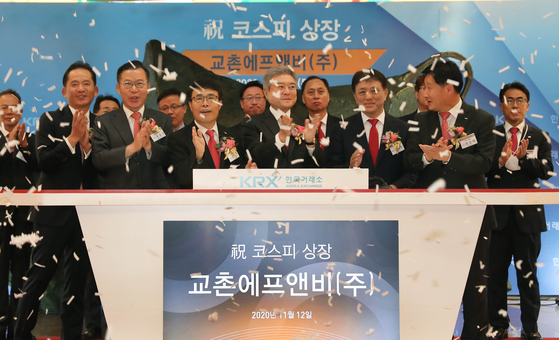 
A two-table fried chicken shop in Gumi, North Gyeongsang, in 1991, Kyochon started trading as a Kospi stock Thursday with a grand plan for global expansion.

Trading was volatile and the price bounced around, unlike other recent initial public offerings (IPOs), such as SK Biopharmaceuticals, Kakao Games and Big Hit Entertainment, which hit the stops out of the gate.

Analysts say the hype surrounding IPO could have died down among retail investors following a disappointing performance by Big Hit and Kakao Games in the days following their debuts.

Some punters are skeptical about the prospects for a company in such an unglamorous and traditional business.

“Kyochon is going to be the next Big Hit? How can the market capitalization for a chicken shop reach that high?” one commentator said on Naver’s online bulletin board for Kyochon. “I don’t understand how people are willing to purchase Kyochon stocks after seeing what happened to Big Hit Entertainment.”

Others noted the small float and said that could help.

“Kyochon’s shares were reasonably priced, and only 4.3 million, or some 18 percent of total shares, are trading in the market. I think prices will keep going up,” said another commentator online.

“Profitability indicators of Kyochon are better than its competitors,” said Nam Seong-hyun, an analyst from Hanwha Investment & Securities. “The company could benefit from the growing retired population, who could potentially become store owners of Kyochon Chicken. More customers are willing to eat out than cook, which could increase sales for the company.”

Analysts noted that Kyochon’s IPO is inspiring a re-evaluation of franchise businesses and their potential for listing. The Born Korea, a franchise restaurant group, and Hansot, a dosirak, or lunch box, company, said they may go public soon.

“As the first franchise restaurant to directly list on the exchange, Kyochon could prove that the franchise business has matured into something that can make stable profits,” said analyst Nam.

The funds raised through Kyochon’s IPO will be invested into building the company’s Pangyo headquarters and its logistics center in Pyeongtaek, Gyeonggi, and partially to redeem the company’s debt.

Other big name IPOs are waiting in line to go public next year, such as game maker Krafton, online-only bank Kakao Bank and Socar, the ride-sharing company.