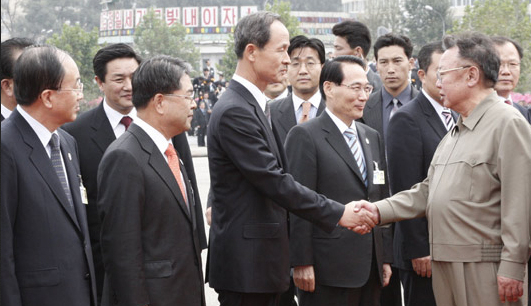 
In October 2007, Minister of Defense Kim Jang-soo met North Korean leader Kim Jong-il in Pyongyang and did not bow when they shook hands. When the photo was released, Kim earned the nickname, “General Straight.” He was compared to National Intelligence Service (NIS) director Kim Man-bok, who bowed. Later, many people applauded Kim’s demeanor.

General Straight was made by a manual. In the regulations under “Salute and Courtesy” in the ROK (Republic of Korea) Military Field Manual, it states “When shaking hands, you should refrain from flattering or being servile by bending the back, lowering the head or shaking the body. You should keep the hand firm, hold the other’s hand lightly, look them in the eyes and exchange handshakes naturally. Shaking hands too hard or holding with two hands is bad manners.” Kim followed the manual to the letter.

The ROK Military Field Manual is largely a reinvention of the U.S. Military Field Manual. “Follow the FM!,” a popular phrase in the military, comes from the field manual. Many of the field manuals used by the U.S. Forces are thicker than a 300-page novel and contain detailed illustrations. Some say that the strength of the most powerful military in the world comes not from its strong weapons system but from its detailed field manuals.

Why do they obsess over detailed rules in the field manuals? First of all, when an accident occurs, you can be free from responsibility if you followed the manual. Another role is to prevent mistakes by minimizing the time needed to make a decision.

Field manuals also help prevent selfish human nature from influencing a decision. Abandoning a fellow soldier to save oneself cannot be tolerated in war or peace. Based on various field experiences, field manuals are the foundation of the military.

Meanwhile, Justice Minister Choo Mi-ae said that allegations against her demanding special treatment for her son during his military service were fictitious and then apologized. After her son’s peer became a whistleblower, Democratic Party (DP) lawmaker Hwang Hee compared him to a child playing with fire in the mountain and then burning the entire mountain. “The soldier — the initial trigger — should be investigated thoroughly,” he complained.

Their remarks overlook the power of manuals. Even the president, who is the commander-in-chief, cannot reproach a soldier who claims to have followed the manual. A field manual never lies.