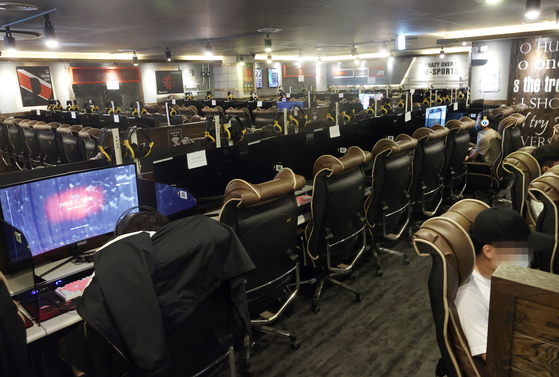 Most of the seats remain empty at an internet cafe, in Seongdong District in eastern Seoul on Monday. While the government has allowed for the opening of internet cafes, restrictions remain.

Yoon Jae-jung, 54, who runs an internet cafe in Eunpyeong District, northern Seoul, is not entirely happy with the government’s lifting of the so-called Level 2.5 social distancing guidelines for the greater Seoul area.

With the eased measures, internet cafes are allowed to reopen starting on Monday. But the government has issued a few new rules: Minors are not allowed in the cafes, eating is prohibited and customers must not be seated too close to each other.

“Why is eating at internet cafes risky when eating at restaurants is considered to be safe? At internet cafes, customers eat while watching their monitors, not talking to others." Yoon said. "I don’t understand what makes the government think eating food at an internet cafe is dangerous."

“I’m pleased that the government finally allowed us to reopen the business. But if the government doesn’t allow us to sell food in [internet] cafes, it’s no different than ordering us to close down.”

The average price for an hour at an internet cafe is 1,000 won ($0.85), though they cost a little more in urban areas and a little less in the countryside. According to internet cafe owners, of the 1,000 won, 15 percent, or 150 won, goes to game companies as royalties. In other words, if a visitor to an internet cafe doesn’t eat anything and only plays a game for an hour, the owner can earn just 850 won.

As a result, 4,000 won or 5,000 won of ramyeon or fried rice, as well as some cookies and chips that the owners sell in the cafe are their major source of income.

A woman in her 50s who runs an internet cafe in Seongdong District, eastern Seoul, says she is frustrated about the government’s “unreasonable” restrictions.

“Restaurants and cafes are the places where people talk to each other while eating and drinking. Allowing them but restricting us? This doesn't make any sense,” the woman said. “If I reopen the cafe, I need to pay so many fees, such as the electric bill, gas bill and water bill. I'd rather close it until the government lifts the regulations.”

She says many internet cafe owners in Seongdong District have already gone out of business. She might be forced to do the same. 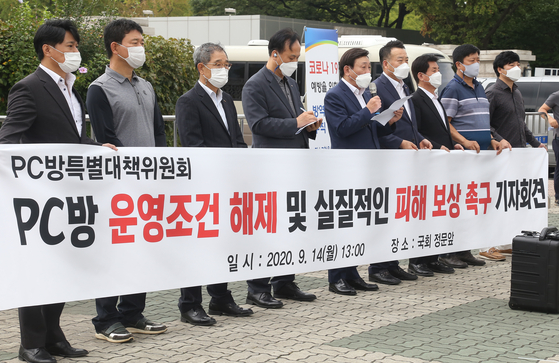 Internet cafe owners hold a press conference in front of the National Assembly in Yeouido, western Seoul, on Monday. [YONHAP]

The Korea Internet PC Culture Association, the Cooperative of Internet Contents Provider in Korea and the internet cafe owners across the country on Monday held a press conference in front of the National Assembly in Yeouido, western Seoul, urging the government to lift restrictions on eating in internet cafes.

They said they welcome the government’s decision of excluding internet cafes from the list of high-risk business. But they argue restricting the sale of food is the same as "telling them to close down their business.”

“We don’t understand how the government came up with the amount of 2 million won of cash grants,” Kim Byung-soo, chairman of the Korea Internet PC Culture Association, said. “Internet cafe owners, who have been faithfully following the guidelines more than anyone else, now feel devastated and have been driven into the corner.”

[WHY] Dinner for two with a side of Starcraft: A modern take on the PC bang