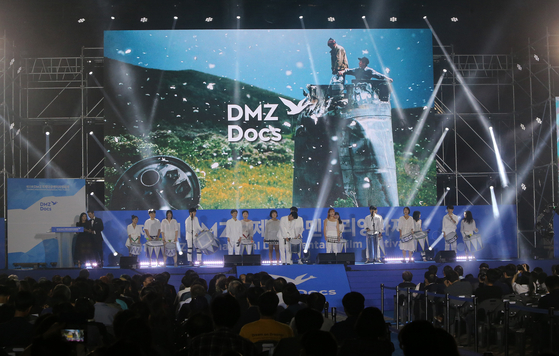 
The 12th DMZ International Documentary Film Festival is to be held from Sept. 17 to 24 both online and offline at the Megabox Baekseok branch in Gyeonggi.

“A Long Way to School” by director Kim Jung-in will open the event. The documentary centers around the reopening of Kongjin elementary school in Gangseo District, western Seoul, after it closed down due to lack of students.

A total of 122 films from 33 countries were invited this year. Eleven are local documentaries.

The festival’s offline screenings will take place for judges and related insiders, with no audience in attendance.

Fifteen documentaries, including “Sound of Nomad: Koryo Arirang” are to be streamed online on the festival’s YouTube channel.

“DMZ Industry,” a workshop which supports and consults rookie filmmakers with their project films, will be streamed online to introduce 36 projects from Sept. 21 to 24. Other forums such as educating participants on the use of documentary in the Covid-19 era and a panel discussion on the future of the documentary platform in the post-Covid-19 era will also take place online.

More information about the schedule of the online events is available on the festival website (www.dmzdocs.com).