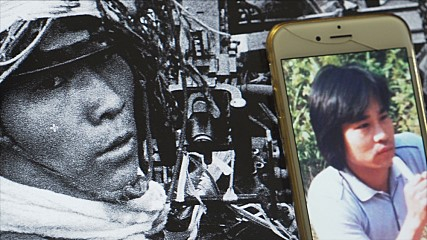 A scene from the film "Kim-Gun," one of the three documentaries selected by this year's DMZ International Documentary Film Festival to be screened on YouTube from May 29. [FULL FILM]


DMZ International Documentary Film Festival selected three documentaries to be shared on YouTube for audience members unable to visit theaters due to the ongoing coronavirus pandemic.


The selections were carefully chosen by the festival organizers to offer insights into society.

From May 29 to June 4, director Kang Sang-woo’s black-and-white documentary “Kim-Gun” will be available on the festival’s YouTube channel. The film attempts to track a young man from the photo taken during the Gwangju uprising in 1980. The film took home the Grand Prize in both the 44th Seoul Independent Film Festival and the eighth Wildflower Film Awards Korea.

Director Kim Dong-won’s “Repatriation” will be screened from June 26 to July 2. For 12 years, Kim documented the daily struggles and lives of unconverted long-term prisoners, who continue to support North Korean ideologies, after they were released. The film became the first Korean film to receive the Freedom of Expression Award at the Sundance Film Festival in 2004.

Finally, “The Remnants,” co-directed by Kim Il-rhan and Lee Hyuk-sang, will be screened from July 31 to Aug. 6. The film focuses on what happened to the residents of a controversial redevelopment area in Yongsan, central Seoul. The film garnered two prizes — Best Korean Documentary Award and Audience Award at the festival in 2016.

More information about the online film screenings is available on the festival website (www.dmzdocs.com).