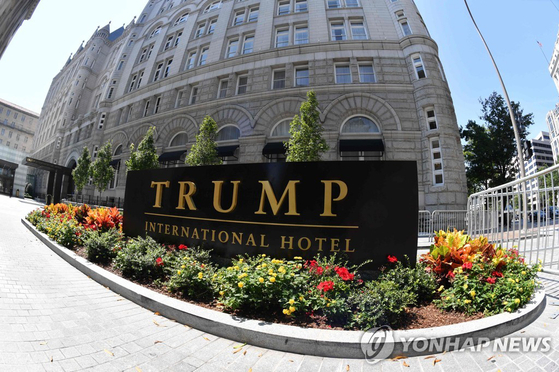 KIM PIL-KYU
The author is a Washington correspondentof the JoongAng Ilbo.


In recent years, the Trump International Hotel has become popular among politicians in Washington, D.C. A local journalist I met while covering stories said Republican Party members liked to meet at the hotel. He said he ran into Secretary of State Mike Pompeo in the lobby. As President Donald Trump sometimes visits the hotel and eats steak, the lobby has literally become a hideout for lobbyists.

In fact, it served as a waiting room during the Republican National Convention (RNC) last month. Many of the speakers who were invited to Trump’s acceptance speech at the White House stayed here. During this time, Tiffany Trump, daughter of President Trump, hosted a wine tasting in the lobby, and Rudy Giuliani, personal attorney to Trump, hosted a radio show.

The hotel had been a historic post office building built in 1899. In 2013, Trump signed a contract for a 60-year lease, renovated the building into a five-star hotel and opened it in 2016. After the inauguration, the hotel is being managed by his two sons.

While the hospitality industry is struggling due to Covid-19, the Trump International Hotel is an exception. It has been fully occupied for big events like the inauguration and Independence Day. During the RNC, regular room rates rose to $800 a day, but rooms were sold out. According to NBC News, all rooms of the hotel have been sold out for Election Day on Nov. 3.

The hotel has also become a target for anti-Trump protestors. Black Lives Matter protestors tagged graffiti on a column, and recently, a message reading, “Trump Disrespected Our Troops,” was projected on the hotel.

Nevertheless, the hotel only seems to encourage people to visit the hotel during Trump’s term.

Last weekend, Trump invited supporters and hosted a luncheon at the hotel.

According to the Center for Responsive Politics, a civic group, political organizations have paid more than $22 million to facilities owned by Trump, including this hotel, since 2015. Regardless of the election outcome, Trump’s two sons will be considered to have used the opportunity to turn a profit for four years.