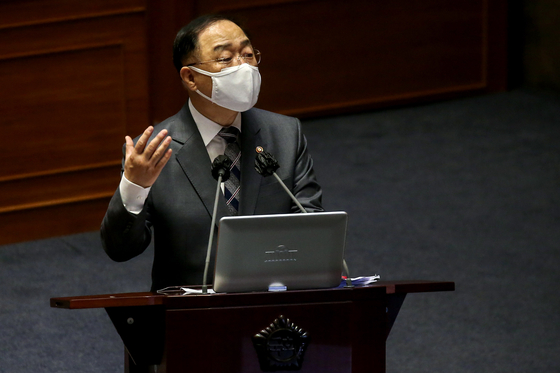 
Finance Minister Hong Nam-ki defended the government's spending in the National Assembly, saying more debt was unavoidable in the fight against the Covid-19 pandemic.

“We’re in a situation where the role of [expansionary] fiscal policy is crucial,” said Hong at the National Assembly on Wednesday.

He said that Korea’s national debt and fiscal balance is good compared to other countries.

“My judgement is that we still have fiscal space,” Hong said. “I don’t understand arguments that we are [heading toward] a sovereign default.”

“If not for that confidence, we wouldn’t have succeeded in the forex stabilization bond,” Hong said.

It was the first time a non-European country was able to issue a bond with a negative yield. The yield on a five-year euro-denominated bond was minus 0.059 percent.

“My evaluation [of the economy] is that the supplementary budgets have helped significantly in overcoming the crisis,” Hong said, citing an August OECD — Organisation for Economic Cooperation and Development — report.

In its last month's “Economic Survey of Korea,” the OECD said thanks to the Korean government’s “prompt response” against Covid-19, Korea is experiencing the “shallowest recession among OECD countries.”

The OECD projected Korea's economy to dip 0.8 percent this year, an improvement from June's projection of negative 1.2 percent growth.

However, in a report released Wednesday, the OECD slightly adjusted its outlook to a 1 percent decline due to the resurgence of the coronavirus since August.
.
Three supplementary budgets amounting to 59 trillion won ($50 billion) have been approved and a fourth amounting to 7.8 trillion won, is currently under review.

With the fourth supplementary budget, which will be funded through government-issued bonds, the nation’s total debt is estimated to amount to 846.9 trillion won. That’s nearly 42 trillion won more than the 805 trillion won expected at the beginning of the year.

It is nearly 120 trillion won more than last year’s debt, and equivalent to 44 percent of the country’s GDP.

Although Korea’s debt-to-GDP ratio is still lower than other major countries' including the United States with 108 percent, Japan with 237.9 percent and China with 60.9 percent, there have been growing concerns about its rise.

Furthermore, Korea expects a 84 trillion won budget deficit this year due to increased spending while government income — especially from corporate taxes — are expected to decline due to the pandemic.

The size of the fiscal deficit is expected to be equivalent to 6.1 percent of GDP.

When including what are known in Korea as the four social insurances — the national pension fund, health insurance, employment insurance and work-related injury insurance — the deficit is expected to reach 118.6 trillion won.

Last year the government reported a 31.2 trillion won surplus. Including the four social insurances, it registered a 10.6 trillion won deficit.

Pressure builds for yet another supplementary budget