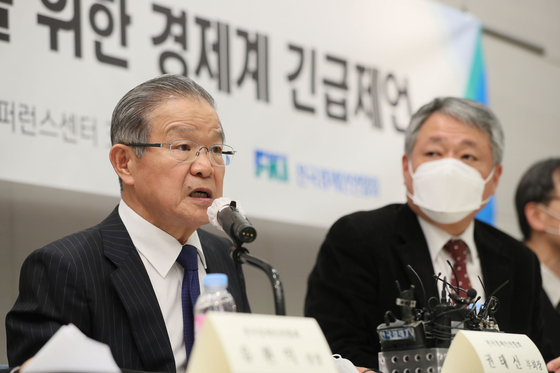 Vice Chairman Kwon Tae-shin of the Korea Federation of Industries speaks to the press. [YONHAP]


Six business associations have jointly criticized a set of legislative amendments that could soon become law.

Their leaders claim revisions to the Commercial Act and Fair Trade Act awaiting National Assembly vote include elements that could constrain the business activity of companies in Korea.

The set of bills, eight in all, include measures that would require holding companies to own more of their subsidiaries and strengthen independence for outside auditors.

The six groups said the revisions are outdated and far behind the global standard and warned they will make Korean companies less competitive in the global market, eventually having a negative impact on the local economy.

Companies have claimed the revisions are “poisonous,” arguing they will increase costs to acquire new companies and weaken the power of major shareholders.

“If the revisions to the two laws are passed at the National Assembly, they will cause side effects,” the statement read. They will force “companies to spend more to acquire stakes of other companies.”

They said after the revisions, it would cost an additional 30.9 trillion won ($26.3 billion) for 16 local chaebol to transition into holding companies. If the same amount was invested in the companies, it would create some 244,000 new jobs, according to industry officials.

The government is also speeding up reforms in the labor law to meet International Labour Organization standards. Already more than 10 revisions are awaiting approval in the National Assembly.

At the center of controversy is a revision of the Trade Unions and Labor Relations Adjustment Act, which allows laid-off employees and jobless people to join labor unions.

The Korea Chamber of Commerce and Industry submitted a report to the National Assembly on behalf of local businesses urging the government to keep the power balance between labor and the companies.

“The government’s reform to the law on labor unions overly emphasizes labor rights over those of the corporations, tipping the balance between the two sides. There are concerns the revision will escalate conflicts, and the industry officials advise the government come up with countermeasures to protect employers,” the report read.

The six groups advised the government take a cautious approach to revising laws that hinder business activities, especially when Korea is faced with an economic crisis.

“Countries around the globe are easing regulation to overcome economic difficulties. Deregulation should be the priority so that companies can freely invest and create jobs. The government needs to be discreet in revising laws that could dampen our efforts to tackle the economic crisis,” read the statement.