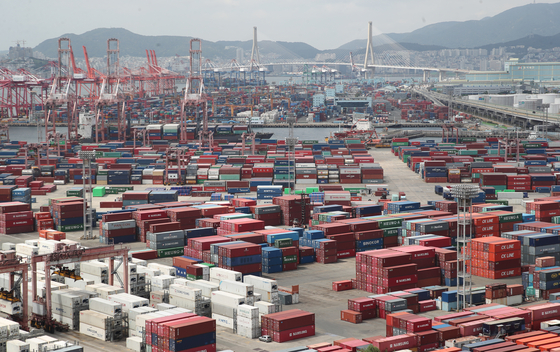 Shipments stocked up at a port in Busan on Sept. 1. [NEWS1]


The global economy is set to lose $10 trillion of growth over the next five years if the trade war between the United States and China worsens, HSBC and the Boston Consulting Group (BCG) warned in a recent report released Thursday.

Their forecast came as Korea exports fall for their sixth straight month. While the rate of decline has eased, the weakness in outbound shipment growth persists.

“The Covid-19 pandemic represents a further deep shock to global trade. It is prompting a reconfiguration of value chains around the world, as countries look to reduce their reliance on certain foreign suppliers and increase their self-sufficiency in strategic industries, and as firms seek to reduce their dependence on single sources of supply,” the report said. “There is a real risk that these trends may further fuel a damaging spiral of trade restrictions and retaliation.”

The report noted that trade for the G20 countries, which account for 60 percent of the global merchandise trade, could expand 2.5 percent compounded through 2025, which translated into $10 billion of economic growth in that period. It added that this is important as the world recovers from the Covid-19 pandemic.

If trade protectionism prevails, “it will impose a persistent drag,” the report notes.

HSBC makes 80 percent of its profits in China, including Hong Kong, while Boston Consulting Group has a large practice in the country, with four offices there.

The Organisation for Economic Cooperation and Development (OECD) has also warned about trade restrictions and their effect on the global economy.

On Wednesday, the international organization announced a revised forecast for growth that was slightly better than its June forecast. While the global economy is expected to contract this year, the fall will be 4.5 percent rather than the 6 percent projected in June.

This "is partly because the trade restrictions that were imposed during the crisis has had a huge cost,” Boone said. This not only includes restrictions on business trips but also increases in administrative barriers.

She said closing borders and administrative barriers raise trade costs as little as 8 percent to as much as 16 percent, which wipe out profits and forces businesses to reconsider their trade strategies.

"The more barriers we set up for trade, the more we request visa and licenses or unjustified restrictions, the more complicated we make trade, more business will think ‘This isn't worth it,’ 'This export isn't worth it' and that has a cost when it comes to economic activities as well as jobs,” Boon said.