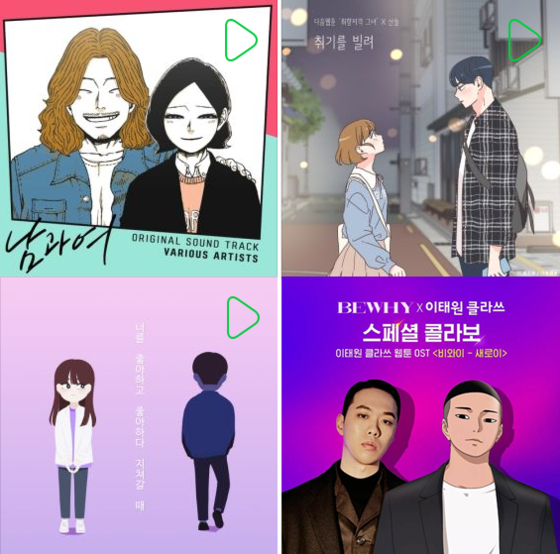 Webtoon soundtracks. Clockwise from top left: ’A Man and a Woman,“ ’She is My Type,“ ’Itaewon Class" and ’Love Revolution." [NAVER, KAKAO]


Webtoon companies are now pushing soundtracks in an effort to squeeze as much as possible out of the business and keep the boom going.

Kakao and Naver are enlisting popular singers to attract more viewers and build another revenue stream.

Singer Lee Seung-chul released a soundtrack for web novel “The Legendary Moonlight Sculptor” in January, while rapper BewhY participated in the “Itaewon Class” soundtrack two months later. Both soundtracks have ranked high on the charts.

In July, singer Sandeul of boy band B1A4 released a soundtrack called “Slightly Tipsy” for “She is My Type,” which has over 220 million cumulative views. The song was in the top 10 on the charts for about two consecutive months through Sept. 11, and it is No. 2 on Melon.

In June, Naver released music for “A Man and a Woman” by cartoonist Hyeono. A total of 13 singers, including Kwak Jin-un, created 14 songs for the project.

Kim Jae-joong of boy band JYJ participated in a soundtrack for “Noblesse."

About a decade ago, Korean webtoons started to have background music. In 2010, the soundtrack for “Song Of The Cloud,” by cartoonist Ho Rang was released as an album. At the time, indie bands who were not that popular participated in webtoon soundtracks.

The trend has been changing recently. As webtoons soundtracks have become a big source of profit for companies, they are scrambling to hire popular singers and K-pop idols.

“The webtoon market has now become an industry that actually produces videos and music,” Seo Chan-hwe, a cartoon columnist, said. “Webtoon soundtracks have started gaining popularity since early this year when soundtracks of popular webtoons 'The Legendary Moonlight Sculptor' and ‘Itaewon Class’ were released.”

The webtoon intellectual property market is likely to exceed 1 trillion won ($851 million) in value this year. According to Korea Development Institute, it was about 210 billion won in 2014.

The sharp increase in the market size is largely led by the popularity of webtoon-based films and dramas. Webtoon-based JTBC drama “Itaewon Class” has gained a lot of attention from Koreans and closed with the second-highest ratings ever for a drama on JTBC.

“Webtoons have no limits, so they can be reproduced in any types or genre,” said Jung Hwan-suk, vice president of Daum Webtoon.

“Soundtracks can also be used when producing dramas or movies in the future,” Han said. “Singers can make debuts through webtoon soundtracks, and companies can use those as a means of attracting more viewers.”