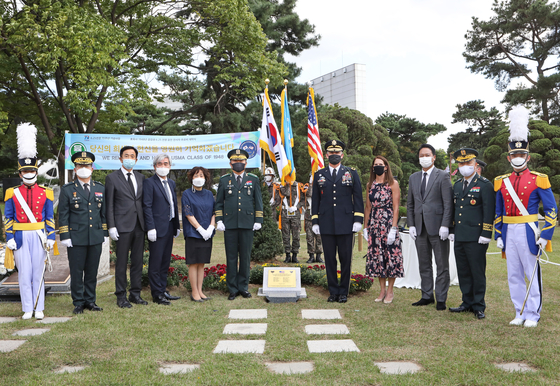 A plaque to honor the sacrifices made by the United States Military Academy (USMA) class of 1948 in the 1950-53 Korean War was unveiled last Friday at the Korea Military Academy (KMA) in Nowon District, northern Seoul.

The KMA said in a statement that the area will become a memorial park to pay respect to the USMA graduates who fought in the Korean War to “protect the freedom and peace of the Republic of Korea [ROK],” and to highlight the importance of the ROK-U.S. alliance.

Among 301 graduates of the USMA class of 1948, 103 fought in the war and 17 lost their lives. All 17 names were inscribed on the plaque revealed last Friday during a ceremony hosted by the KMA and sponsored by the Korea Defense Veterans Association (KDVA), which contributed 3 million won ($2,600) for the plaque.

The ceremony was participated in by Lt. Gen. Chung Jin-kyung, superintendent of the KMA; Maj. Gen. Steve Gilland, commanding general of the 2nd Infantry Division/ROK-U.S. Combined Division; Maj. Gen. (Ret.) Lee Seo-young, president of the KDVA-Korea Chapter; Gen. (Ret.) Kwon Oh-sung, honorary president of the KDVA-Korea Chapter; Brig. Gen. Shin Sang-bum, head of the Commemorative Task Force for the 70th Anniversary of the Korean War at the Ministry of National Defense; and Kim Ju-yong, director general for international cooperation and of the 70th Anniversary of the Korean War Commemoration Office at the Ministry of Patriots and Veterans Affairs.

“The values of freedom and peace that these men [of the USMA class of 1948] tried to protect have made the Republic of Korea what it is today, and were the foundation of the world’s strongest ROK-U.S. alliance,” said Chung.

By forming a memorial park for fallen USMA soldiers on the university campus, Chung continued that he looks forward to honoring the “West Point heroes” and teaching the importance of the alliance to KMA cadets and the general public.

“This memorial is a reminder of all the soldiers that made the ultimate sacrifice from the United States, Korea and the other 21 nations that fought in the defense of the Korean Peninsula,” said Gilland. “For we not honor just the soldiers, not just the graduates of the military academy, but also the families and all of those who experienced hardships of war both at home and abroad.”

Gilland continued that with this year being the 70th anniversary of the outbreak of the Korean War, the occasion “commemorates the early foundations of the ROK-U.S. alliance, which has only grown stronger through the decades.”