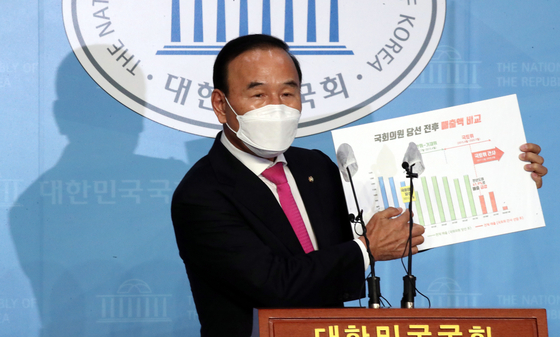 Rep. Park Duk-hyum of the People Power Party holds a press conference to deny allegations that his family businesses were awarded government construction contracts while he was serving on the Land, Infrastructure and Transport Committee. [YONHAP]


A construction mogul-turned-lawmaker for the main opposition party said there was no conflict of interest between his family business and his serving on the National Assembly’s committee overseeing the Land Ministry.

Rep. Park Duk-hyum of the People Power Party (PPP) held a press conference Monday to deny suspicions raised by the ruling Democratic Party (DP) that construction companies owned by him and his family won massive national and local government projects because he served on the Land, Infrastructure and Transport Committee of the National Assembly. The committee has oversight over the Land, Infrastructure and Transport Ministry and affiliated institutions.

“While serving as a lawmaker, I have never pressured or sought favors from the ministry or public institutions to win contracts,” Park, a three-term lawmaker representing Boeun, Okcheon, Yeongdong and Goesan counties in North Chungcheong, said Monday.

Park, who won his first election in 2012, served as a member of the Land, Infrastructure and Transport Committee of the National Assembly from April 2015 until this month. After suspicions arose about possible conflicts of interest with his family businesses, Park stepped down from the committee and started serving on the Environment and Labor Committee.

Last month, MBC aired a report saying that a construction company owned by Park’s family won 14 construction projects worth 40 billion won ($34.4 million) from the Land Ministry and the Seoul Metropolitan Government. It raised the suspicion that Park abused his power as a lawmaker on the committee to win the projects.

Following the report, DP lawmakers demanded Park resign from the Land, Infrastructure and Transport Committee. Park insisted he had done no wrong but agreed to leave the committee on Aug. 25. “I have worked in the construction business for my entire life, and I served the committee as an expert in the industry with pride,” he said at the time.

Last Tuesday, a civic group filed a complaint with the police asking it to investigate Park for abusing his power and committing violations of the Anti-Corruption Act and Public Service Ethics Act.

Rep. Jin Sung-joon of the DP described more suspicions last Wednesday. He said companies owned by Park’s family scored over 100 billion won in revenues by winning construction and technology contracts from the Land Ministry and public institutions supervised by the ministry over the last five years.

According to Jin, the ministry and affiliated institutions awarded 25 projects to three construction companies owned by Park’s family. The projects were worth 77.31 billion won in total.

The ministry and its institutions paid another 37.1 billion to two companies owned by Park’s family over the past five years for using their technologies, Jin said.

Although Jin said there was a conflict of interest, the companies have a history of winning bids by the ministry and receiving technology usage payments when Park was not serving on the Land, Infrastructure and Transport Committee. Records showed that the companies had won projects from the ministry since 2010.

Park was a renowned entrepreneur before he became a politician. The construction companies were founded by Park decades ago, and he served as chairman of the Korea Specialty Construction Association from 2006 till 2012. He handed over the construction businesses to his son and elder brother after winning his first election in 2012, but still owns major stakes in the companies.

“He served on the Land Committee since 2015. He was the opposition party’s chief negotiator on the committee since 2018 until early this year,” Jin said Wednesday. “There are serious suspicions that he violated laws.”

In his press conference Monday, Park said Jin’s arguments are wrong. He showed data that the companies’ sales went down after he became a lawmaker.

Park also said the Land Ministry and the Seoul city government were longtime customers of the companies. “The contracts are nothing new,” he said. “I checked with the companies, and the payments were legitimately made after completing work.

“If the ruling party’s arguments are true, it means that the country’s contract bidding system is tainted,” Park said. “They are telling the people to distrust this government.”

He also said his family companies won projects from the Seoul Metropolitan Government when the late Park Won-son, a DP member, was the mayor. “The people know that Mayor Park would never give preferential treatment to or break laws for a lawmaker’s family business,” he said.

Park said the ruling party is making groundless accusations against him to distract the people’s attention from DP corruption scandals.

But the DP continued to attack him. “Park must give up his lawmaker seat, and the PPP must handle this matter reasonably,” said Rep. Choi In-ho, senior spokesman for the DP.

The PPP said it will launch a special investigation. “We will form a team with the people who have experience in investigating such matters such as former prosecutors and police officials as well as experts in the bidding system,” Rep. Choi Hyung-du, a spokesman for the PPP, said. “The team will include both PPP members and outsiders.”

Opinions are split among PPP lawmakers about Park’s fate.

“It is cruel to force him to give up his seat just because his family businesses were making deals,” a senior lawmaker told the JoongAng Ilbo.

A first-term lawmaker of the PPP disagreed. “It doesn’t matter whether it’s legal or not,” he said. “It is inappropriate that his family’s companies won more than 100 billion won from the government offices that he had an oversight over.”