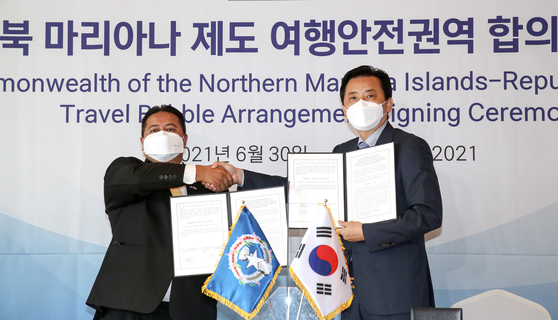 Saipan will be the first “travel bubble” destination for Korea, with the island open for vaccinated visitors from the country starting later this summer.

The arrangement is only for group tours and only for people who have been fully inoculated against Covid-19 for at least 14 days. Travelers will also have to take four Covid-19 tests.

Upon returning to Korea, they will not be required to quarantine.

Saipan is a part of the U.S. Commonwealth of the Northern Mariana Islands (CNMI), which has one of the lowest Covid-19 infection rates in the world. To date, only 183 cases and two deaths have been reported related to the virus -- and most of those where imported cases -- and 63.8 percent of the population has been vaccinated.


The agreement, which is set to go into effect in late July or early August, could be followed by others as the Korean government contemplates travel bubbles with Taiwan, Thailand, Singapore and Guam.

Under the terms of the arrangement with the CNMI, people who have received two Pfizer, Moderna or AstraZenca shots or one Janssen shot will be qualified for travel after the two-week waiting period. They will have to be tested within three days of departure, then tested again upon arrival in Saipan, before they leave Saipan and once more upon their return to Korea.

All tests will be paid for by the government.

It is a reciprocal arrangement, so visitors from Saipan to Korea will be able to travel under similar conditions.

The Korea government first raised the issue with the CNMI government on June 9, with airlines and other travel-related companies pushing hard for the opening of destinations. The CNMI government has been eager to restart tourism as its economy depends greatly on visitor spending.

Before the pandemic started, Saipan was a popular destination for Korean tourists, given the clean air, warm weather, pristine beaches and the fact that the flight from Incheon only takes 4.5 hours.

Jeju Air is set to begin serving Saipan again from July 10, while Asiana Airlines is planning a return from July 24. T’way Air is currently working to resume flights to the island, according to a report in the Saipan Tribune.

The world is returning to normal due to vaccinations, but that is “not yet reflected in the travel industry,” said Woo Kee-hong, Korean Air Lines president.

Korean Air Lines did not serve Saipan before the pandemic, but is planning on restarting flights to Guam, which is just south of Saipan and can be used as a transit point to reach the CNMI.

In 2021 through April, the number of Koreans traveling overseas fell 96 percent on year.

In town via the bubble