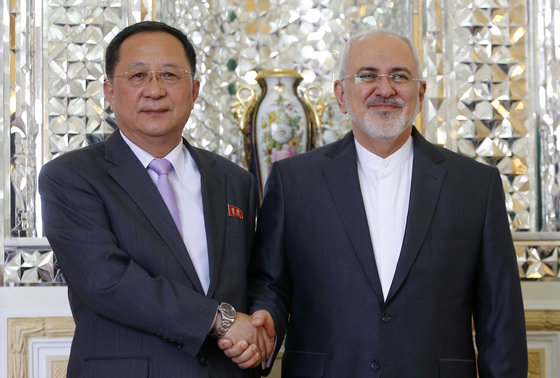 
Washington is concerned about North Korea’s cooperation with Iran on long-range missile development and will do anything it can to prevent it, said a U.S. State Department special envoy.

Special Representative for Iran and Venezuela Elliott Abrams made the comment in response to a reporter’s question about potential ties between Pyongyang and Tehran on weapons development, hours after U.S. President Donald Trump announced United Nations sanctions against Iran were back in force.

The unilateral measures, coming less than two months before election day on Nov. 3, have not been reciprocated by other UN Security Council members like China, Russia or even U.S. allies Britain and France, which have urged the Trump administration to respect the nuclear deal made with Tehran during the Obama years, known as the Joint Comprehensive Plan of Action (Jcpoa).

On Sunday, Reuters reported a senior U.S. official requesting anonymity saying, without citing evidence, that Iran had resumed cooperation with North Korea in developing long-range missiles, “including the transfer of critical parts.”

No details were given as to when such exchanges began, stopped or started again, Reuters said.

In a press conference announcing Trump’s executive order restoring sanctions on Iran, U.S. Secretary of State Mike Pompeo issued a warning threatening punishment for any country that continues to trade arms with Tehran.

“Our actions today are a warning that should be heard worldwide,” Pompeo said. “No matter who you are, if you violate the UN arms embargo on Iran, you risk sanctions.”

Though its contours are unclear, Pyongyang and Tehran share an extensive history of cooperation on strategic munitions development going back decades, a relationship that some experts have called a de facto alliance that not only includes exchanges in technicians and arms but also in key technology.

In mid-2016, North Korea tested its Hwasong-10 intermediate-range ballistic missile, also known as the Musudan, with an estimated maximum range of 4,000 kilometers (2,485 miles). The following year, Iran tested a medium-range missile, later dubbed the Khorramshahr, that closely resembled the Musudan though with a significantly reduced range of around 2,500 kilometers.

The Khorramshahr is believed to have vastly expanded Tehran’s strike capabilities in the region, and, had it the range of the Musudan, would have given the country the ability to target several European capitals from Iranian territory.

Other experts noted that Iran tested a Shahab-3 or Shahab-2 medium-range ballistic missile in January 2017 based on North Korea’s Rodong or Scud-C missiles.

Tehran is also believed to have used its Qiam series missiles — based on the North’s Scud-C system — to launch attacks on American bases in Iraq last January.

According to Pyongyang-analysis website 38 North, the North’s test of its Pukkuksong-1 submarine-launched ballistic missile (SLBM) in 2016, which used solid propellant rocket motors similar to that used in Iran’s Sejjil missile, raised the likelihood the technology was obtained from Tehran.

The common fear analysts and experts around the world have outlined is the extent to which Iran has access to North Korea’s most dangerous missiles to date, the Hwasong-14 and 15 intercontinental ballistic missiles (ICBMs).

The first stage 80-ton engine used for both missiles, based on a variant allegedly obtained from Ukraine for the Hwasong-12, is believed to have been shared with Iran.