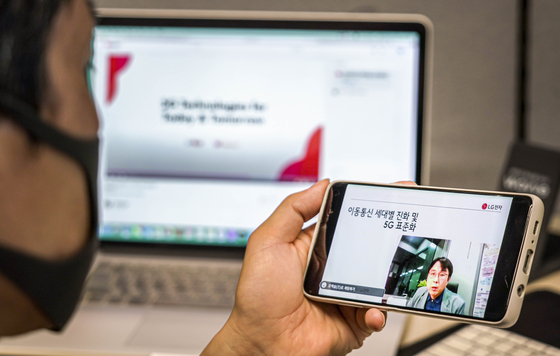 A smartphone shows a webinar hosted by SK Telecom on Wednesday. [SK TELECOM]


SK Telecom will target corporate clients when it expands its 5G network later this year, aiming to deliver faster speeds than the current commercial service through a greater range of frequencies.

The company said during an online seminar Wednesday that it will introduce a 28 gigahertz band available on standalone mode within this year.

Korean carriers currently use a 3.5 gigahertz spectrum on the non-standalone version, which introduces delays by requiring support from the existing 4G LTE.

“Now that the 5G standard Release 16 was set in July, an industry-leading B2B business model is the key to success,” he said.

The webinar centered around discussing the carrier's strategy to further commercialize 5G and the technological state of the latest wireless internet connectivity, bringing together Ross O’Brien, a senior contributing editor to MIT Technology Review, and Alex Choi from Deutsche Telekom as well as SKT officials.

The current 5G network has often come under fire due to its low speeds and high frequency of delay. Industry insiders have maintained that further migration into the new mode and spectrum could ease the issue.

Ryu went on to note that devices fitted with chip for the 28 gigahertz network will be more expensive than the current 5G-enabled smartphones.

The equipment needed for the spectrum also remains bulky, a factor that could turn away corporate clients, according to Ryu.

SK Telecom is on track to reduce the size of the network equipment, he said.

The number of 5G users in Korea reached nearly 8 million in July, according to the latest data available by the Ministry of Science and ICT. The ministry and SK Telecom both predicted that the number could surpass 10 million by the end of this year.

SK Telecom has the most 5G subscribers among the Korean mobile carriers, at 4 million.

Korea was the first country in the world to commercialize a 5G network. But, the quality and availability of the network fell short of expectations.

For instance, Korea’s 5G users are found to be connected to the network at just over 20 percent of the time, according to a report released by industry tracker Opensignal in August.