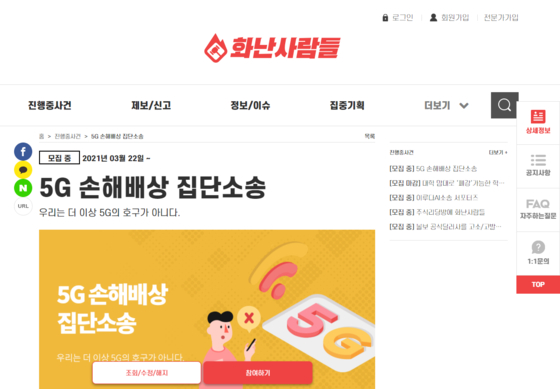 
Disgruntled 5G users launched a class action suit against Korea’s major telecom operators on Monday, accusing the carriers of providing a spotty, slower-than-advertised connection for what was supposed to be the world-leading fifth generation network.

With the aim of gathering 1 million 5G subscribers, the suit will charge SK Telecom, KT and LG U+ with either malpractice or gross negligence.

If the consumers win, the three companies will be required to pay around 1 million won ($890) per user, which translate to 1 trillion won in total.

“We’ve brought together nearly 1,000 users on the first day of the suit,” said Kim Jin-wook, an attorney at Joowon, the law firm handling the class action suit.

“We will keep the suit open for two months as we aim to gather 1 million users,” he said. “But regardless of the final headcount for the suit, we will push ahead."

Kim told the Korea JoongAng Daily that plaintiffs will also consider holding the government accountable for failing to properly regulate the mobile carriers.

According to a statement from Joowon posted on "Angry People," a website where law firms can post class action lawsuits to find more consumers, the 5G service offered falls short of what many carriers advertised while users have to pay more than they would have on 4G LTE plans.

“The three telecom companies promoted the 5G service as being 20 times faster than LTE, but its actual speed was a hundredth of what they advertised,” the statement said.

With limited coverage in buildings and less-populated areas, the statement added, smartphones often fail to detect a stable 5G signal and revert back to 4G, increasing the time it takes for data to be transmitted.

One reason for the unstable connections inside the city stems from the lack of network equipment inside buildings, as the carriers have constantly failed to meet their target for different reasons, including the pandemic.

Another factor is the type of 5G network used by the telecom operators. Korean carriers currently use the non-standalone version, which can introduce delays.