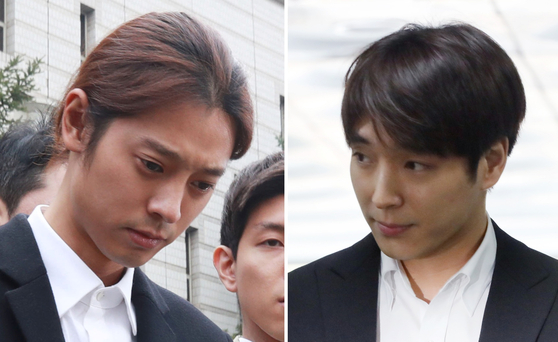 
The Supreme Court on Thursday sentenced singers Jung Joon-young to five years in prison and Choi Jong-hoon to two years and six months in prison for raping unconscious women.

Jung and Choi lost their appeals of the verdict handed down by the Seoul Central District Court last November.

Three other defendants, one of whom is the older brother of the girl group Girls’ Generation’s Kwon Yu-ri, also lost their appeals and were found guilty of taking part in the sexual assaults with Jung and Choi. Their sentences ranged from an eight-month suspended sentence to a four-year prison term.

The court ruled “there is no illegitimacy in the original court’s decision regarding their crimes of rape and sexual assault.”

Jung and Choi were indicted for raping drunk unconscious women in Hongcheon County, Gangwon, in January 2016 and again in Daegu in March that year.

Jung was additionally indicted on charges of secretly filming himself having sex with women and sharing the videos 11 times in mobile chat rooms.

During the initial trial, the two claimed that some of the encounters were consensual, but the court ruled in favor of the victims and sentenced Jung and Choi to six and five years in prison, respectively.

The appeals court, however, reduced Choi’s sentence to two years and six months taking into consideration that he had reached a financial settlement with one of the victims.

Indie rock band Jannabi to drop new album on May 10

A love affair with Pyongyang (KOR)