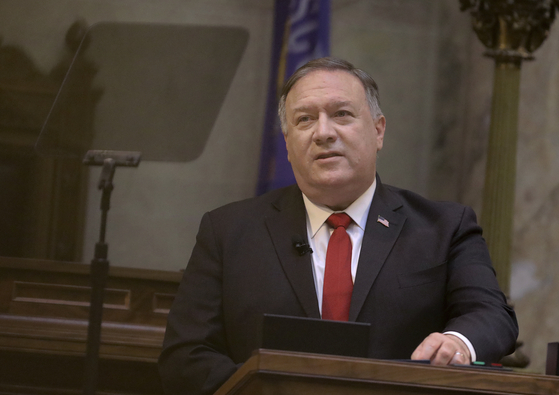 U.S. Secretary of State Mike Pompeo speaks in the Senate chamber of the Wisconsin State Capitol in Madison, Wisconsin, Wednesday, warning state Republican legislators of the risks of China. [AP/YONHAP]


U.S. Secretary of State Mike Pompeo is expected to visit Korea next month, sources said Wednesday, during a critical juncture for Sino-U.S. tensions and uncertainty in the direction of North Korean denuclearization talks.

One government source said that Pompeo is expected to make a two-day trip starting Oct. 7, right after Korea’s five-day Chuseok holiday, which kicks off next Wednesday.

This would mark his first visit to Seoul in two years, as Pompeo last visited the country in October 2018, immediately after his fourth trip to Pyongyang.

If such a visit is arranged, Pompeo is likely to hold talks with his South Korean counterpart, Foreign Minister Kang Kyung-wha, and make a courtesy call to President Moon Jae-in.

Pompeo, a former director of the Central Intelligence Agency (CIA), has played a key messenger role for U.S. President Donald Trump to Pyongyang since he was named the top U.S. diplomat in 2018. He made a secretive first trip to North Korea over the Easter weekend in early April 2018, which helped set in motion the first North-U.S. summit in Singapore on June 12 that year.

Pompeo during the trip may try to gain Seoul’s support amid rising Sino-U.S. rivalry over trade and security matters and push for South Korea to participate in such an expanded Quad structure.

Pompeo came down on the challenges posed by China, including in the telecommunication sector, at the Wisconsin State Capitol on Wednesday stressing the United States will build over time "a system of services that we know we can rely upon that will have Western values, Western rule of law, a central understanding about transparency and openness.”

He had been asked by a state senator about the risks China’s investment in other countries pose to U.S. foreign and economic policy interests.

Pompeo noted the U.S.'s efforts to turn countries away from using the services of Chinese telecom giant Huawei by stressing political, military security and economic risks.

“Going out there and making sure everybody recognized the risk, has in fact led there to be big changes in how the world thinks about engaging with the Chinese Communist Party," he said.

Pompeo is also expected to travel to Tokyo and meet with Japan’s new prime minister, Yoshihide Suga, according to Japanese broadcaster NHK.

A Seoul Foreign Ministry official however said Thursday said that “nothing has been confirmed so far” on the timing of Pompeo’s potential visit.

While it is not expected that Pompeo will visit Pyongyang if he makes a trip to East Asia as planned, there will be interest to see what messaging he has for North Korea. The top U.S. envoy has continued to push for the regime’s final, fully verified denuclearization while stressing the door dialogue remain open.

Such a visit to the region could fall ahead of the 75th anniversary of the founding of the North’s ruling Workers’ Party on Oct. 10, which is usually marked by a massive military parade. It also comes just ahead of the U.S. presidential elections on Nov. 3.

Seoul and Washington have not always seen eye-to-eye on the pace of inter-Korean cooperation. U.S. officials have often said that such initiatives need to happen in lockstep with progress toward denuclearization.

The U.S. State Department on Wednesday gave a lukewarm response to President Moon Jae-in’s push for a declaration to end the 1950-53 Korean War in his virtual address to the 75th United Nations General Assembly in New York.

“The United States and the Republic of Korea [ROK] coordinate closely on our efforts related to the DPRK, and we are committed to close coordination on our unified response to North Korea.” The DPRK is the acronym for the North’s official name, the Democratic People’s Republic of Korea.

Moon in his speech rallied support for an “era of reconciliation and prosperity through the end-of-war declaration” to “open the door to complete denuclearization and a permanent peace regime on the Korean Peninsula."

However, U.S. experts have been skeptical of the feasibility of Moon’s proposal and its timeliness.

“I think normalization requires an end to the DPRK's nuclear weapons program and its return to the NPT [Non-Proliferation Treaty]," Robert Gallucci, the chief U.S. negotiator during the North Korean nuclear crisis of 1994, told Voice of America (VOA) Wednesday.

Gallucci addressed the challenges of “sequencing” when talking about a formal end to the war, which could involve the process of lifting sanctions, disbanding of the North's nuclear weapons program and steps to address human rights concerns.

“All this suggests to some of us that the best way forward is step by step, rather than waiting to make some grand bargain,” he said. “If the formal step to end the war is taken alone, I would be concerned that the importance of the move would be lost.”