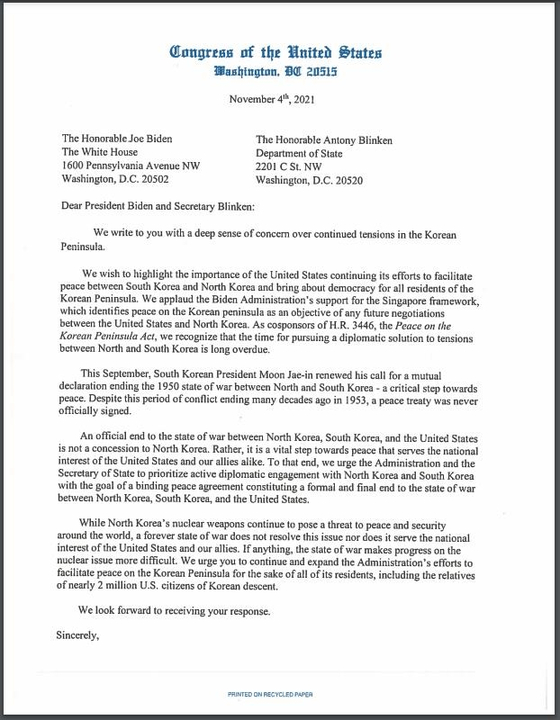 A copy of a letter sent by a group of 23 lawmakers from the U.S. House of Representatives to President Joe Biden and Secretary of State Antony Blinken on Nov. 4, urging them to prioritize engagement with North Korea and aim for a formal declaration to end the1950-53 Korean War, shared by Democratic Rep. Brad Sherman of California on Twitter Monday. [TWITTER]

A group of 23 American lawmakers sent a letter to U.S. President Joe Biden urging him to "prioritize" engagement with North Korea and support a formal declaration to end the 1950-53 Korean War.

The letter dated Nov. 4 was addressed to Biden and U.S. Secretary of State Antony Blinken and called on them to work with South Korea to officially end the Korean War, which ended with an armistice agreement in July 1953 rather than a peace treaty, according to a press release by the office of Democratic Rep. Brad Sherman of California Monday.

The House lawmakers urged Biden and Blinken "to prioritize active diplomatic engagement with North Korea and South Korea with the goal of a binding peace agreement constituting a formal and final end to the state of war between North Korea, South Korea, and the United States."

The letter referred to President Moon Jae-in's proposal to formally declare an end to the Korean War in an address to the United Nations General Assembly in New York in September.

It also "applauded" the Biden administration's "support for the Singapore framework, which identifies peace on the Korean peninsula as an objective of any future negotiations between the United States and North Korea," referring to the agreement between North Korean leader Kim Jong-un and former President Donald Trump signed in June 2018 in Singapore. North-U.S. denuclearization negotiations have been at a standstill since that summit collapsed, however.

The lawmakers conveyed their "deep sense of concern over continued tensions in the Korean Peninsula," but noted that "the state of war makes progress on the nuclear issue more difficult."

They added that the initiative was also for the sake of nearly 2 million American citizens of Korean descent.

"An official end to the state of war is a critical first step that allows South Korea to build the trust necessary to pursue critical U.S. and South Korean objectives, such as restarting stalled talks on denuclearization," said Sherman in a statement. "My colleagues and I urge the Biden administration to prioritize working with President Moon Jae-in on this critical step towards peace on the Korean peninsula."

Sherman, a member of the U.S. House Foreign Affairs Committee, has been an active voice in Congress on Korea-related issues, including co-sponsoring a Peace on the Korean Peninsula Act in May urging diplomatic engagement in pursuit of a binding peace agreement to formally end the Korean War. The bill was referred to the House Committee on Foreign Affairs.

Other signatories to the Nov. 4 letter included Reps. Andy Kim of New Jersey and Grace Meng of New York, also co-sponsors of the Korean Peninsula Act.

Sherman posted a signed copy of the letter on his Twitter account Monday, and wrote, "A mutual declaration ending the 1950 state of war between the United States, South Korea and North Korea is not a concession to Pyongyang – it's a vital step towards peace."

The Korean American Public Action Committee, a California-based activist group, confirmed the sending of the letter to Biden Monday.

Amid multiple rounds of discussions between South Korean and U.S. officials on Seoul's end-of-war proposal in recent weeks, there are questions as to whether the two allies are on the same page on the issue.

When asked if the U.S. agrees to an end-of-war proposal, Ned Price, spokesman for the State Department, avoided a direct answer and replied in a briefing Monday, "We see eye-to-eye with our South Korean counterparts that achieving a complete denuclearization and lasting peace on the Korean Peninsula through dialogue and diplomacy is the best and the most effective course."

On Oct. 26, U.S. National Security Adviser Jake Sullivan admitted that Seoul and Washington may have "somewhat different perspectives on the precise sequence or timing or conditions for different steps," referring to the end-of-war declaration.

The Biden administration, while open to humanitarian cooperation with the North, has been adamant about not backing down from sanctions on the regime. In turn, the North has conducted a series of missile tests since September, including a submarine-launched ballistic missile (SLBM) last month.

Daniel Kritenbrink, the U.S. assistant secretary of state for East Asian and Pacific affairs, will visit Seoul this week amid speculation that he may discuss the end-of-war declaration issue with South Korean officials. 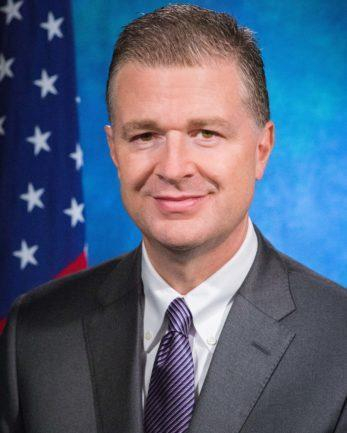 Price said the North's "ballistic missile and nuclear program will certainly be on the table [during Kritenbrink's visit], as will our strategy to advance the prospects for the complete and total denuclearization of the Korean Peninsula."

John Kirby, spokesman for the U.S. Defense Department, said in a press briefing Monday that despite the Biden administration's diplomatic overtures, "To date, there has been no interest shown by Pyongyang to move in that direction, and that's regrettable."

He said the international community would like to see China use its sway with Pyongyang in a "constructive way" and "put some bite into the sanctions that are already in place under the UN Security Council" to steer North Korea to dialogue.

Kritenbrink, making his first trip to Asia since taking on the post in September, arrives in Seoul Wednesday after a four-day trip to Tokyo.

The State Department said his trip will "emphasize the importance of bilateral and trilateral cooperation" among the United States, Japan, and South Korea to "promote peace, security, and prosperity in the Indo-Pacific and beyond."

During his three-day trip to South Korea, Kritenbrink will hold talks with Yeo Seung-bae, Seoul's deputy foreign minister for political affairs, and other senior officials. Kritenbrink is also expected to meet with South Korean presidential candidates during the visit.