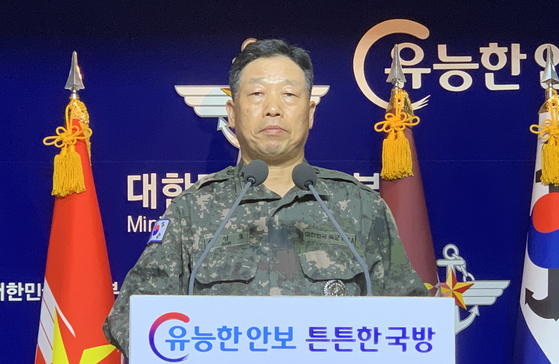 General Ahn Young-ho, head of operations for South Korea's Joint Chiefs of Staff, confirms on Thursday that a fisheries official who went missing Monday had been killed by North Koreans. [YONHAP]


A North Korean maritime patrol shot and killed a South Korean fisheries official who went missing this week, then burned his body and discarded the remains in the Yellow Sea, said Seoul’s Ministry of National Defense on Thursday.

Citing intelligence, a South Korean military official told reporters Thursday the fisheries official had apparently tried to defect and that the North Koreans seem to have killed him out of fear of coronavirus contagion.

A spokesman for South Korea’s Joint Chiefs of Staff condemned the killing of the 47-year-old official and demanded punishment of those responsible.

“We sternly warn that all responsibility for the brutal act committed towards our citizen lies solely with North Korea,” General Ahn Young-ho, head of operations at the JCS, said in a ministry briefing.

South Korea’s presidential office, the Blue House, also denounced the killing as an “act contrary to international norms and humanitarianism” that “cannot be justified with any reason," calling on Pyongyang to explain and apologize for the incident. President Moon Jae-in called on the North to take "responsible measures" for the incident, which he said could not be tolerated, according to his spokesman.

The South Korean official in question, who worked for the Ministry of Oceans and Fisheries’ West Sea Fisheries Management Service, disappeared Monday from a monitoring boat with several colleagues around 2 kilometers (1.2 miles) off the coast of Small Yeonpyeong Island.

The colleagues became aware of his absence at 11:30 a.m. and reported him missing after discovering his shoes, prompting South Korean authorities to start a search operation at around 1:50 p.m. that afternoon.

According to a South Korean military official, a figure believed to be the missing civil servant was observed the next day atop flotsam in North Korean waters around 38 kilometers northwest of where he disappeared, wearing a life vest and looking haggard and exhausted.

A North Korean fisheries control boat approached the figure at around 3:40 p.m., and a person onboard the vessel — who was wearing a gas mask — exchanged dialogue with the castaway from a distance, the military official said.

Hours later, a North Korean patrol boat arrived and an individual on board shot and killed the South Korean official at around 9:40 p.m. The South’s military concluded the official’s body had been cremated sometime after 10:11 p.m. Tuesday, after a military surveillance device on Yeonpyeong Island detected light emanating from the area, the military official added.

“The North Korean patrol appears to have received orders to fire at the missing person, but we cannot determine who [gave the instructions],” the military official said, adding a North Korean soldier wearing a gas mask and a fireproof suit was seen burning the body with gasoline.

South Korea’s Defense Ministry said it lodged a written complaint to North Korea through the United Nations Command Wednesday afternoon, but that no reply had been received.

Pyongyang broke off all official communication with Seoul in June — followed by its unilateral demolition of the inter-Korean liaison office in Kaesong — so the South has few means by which to contact the North.

According to officials in Seoul, the North Korean patrol’s decision to shoot the official may have been prompted by heightened border security guidelines imposed as a result of Covid-19.

Pyongyang claims it has no confirmed virus cases, but the regime has been on high alert throughout the year, shutting down its borders with China and Russia. In July, a former defector to the South returned to the North by swimming across a narrow strait between the two countries, prompting the regime to shut down its border town of Kaesong in fear of Covid-19 contagion.

The regime’s state media at the time said North Korean leader Kim Jong-un ordered serious punishment for military units that failed to detect the infiltration — a measure that appears to have raised the anxiety of maritime patrols on the western coast.

Various outlets, citing sources in the regime, have reported that orders are in place in border areas with China and Russia allowing guards to shoot on sight any person attempting to enter the country.

Whatever the North’s reasons for killing the official, the South Korean military’s explanation of this bizarre incident has generated more questions than answers.

Defense officials could not provide a clear reason why the fisheries official intended to defect to the North, but said the facts that he left his shoes behind, used flotsam as a raft and apparently attempted to appeal his case to the North Koreans upon contact suggested his actions were intentional.

The family of the official, who had two children, denied he had any reason to attempt to defect to the North. One of his colleagues at the West Sea Fisheries Management Service also denied the possibility of defection in a phone call with the JoongAng Ilbo Thursday, saying the civil servant was a regular family man who showed no peculiar signs.

But another military official expressed confidence in the government’s conclusion, saying there were three or four pieces of evidence that could not be publicly disclosed at the moment. Another government source said the individual exhibited signs he was disillusioned with his life in South Korea.

Equally enigmatic was how the official managed to brave a sea crossing of 38 kilometers with practically no equipment, all the while evading patrols in one of the world’s most heavily scrutinized maritime borders in what is known in South Korea as the Northern Limit Line (NLL). 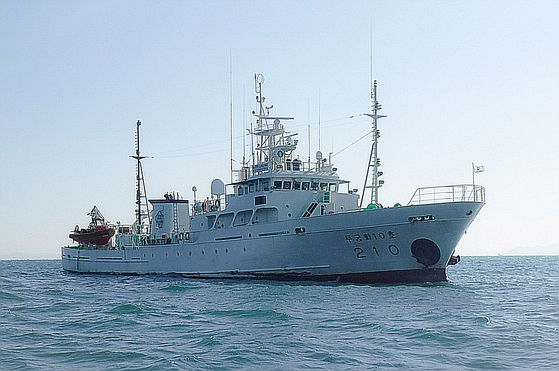 The Mugunghwa-10, a fisheries control boat that the deceased official was on board when he went missing on Monday, in waters just south of South Korea's Yeonpyeong Island. [NEWS1]


Even military officials were unsure as to whether the man swam or floated his way dozens of kilometers into North Korean waters or whether he arrived there atop the flotsam he was observed riding when he made contact with the North Koreans.

At the time of his disappearance, the fisheries official was aboard a 500-ton monitoring vessel that had departed from Mokpo, South Jeolla, that morning and was inspecting waters near South Korea’s Yeonpyeong Islands, located just 10 kilometers south of the NLL.

Though further investigation may illuminate the case further, the official’s death — which echoes the shooting of a South Korean tourist at Mount Kumgang in 2008 — is likely to strain already beleaguered inter-Korean relations even further.

South Korean presidential officials reportedly discussed a response to the killing as President Moon Jae-in was delivering his United Nations address on Tuesday, in which he called for the two Koreas to sign an end-of-war declaration to guarantee permanent peace on the peninsula.

As with the killing of tourist Park Wang-ja at the Mount Kumgang tourist area more than a decade ago, the North’s aggressiveness is inflaming public sentiment in South Korea.