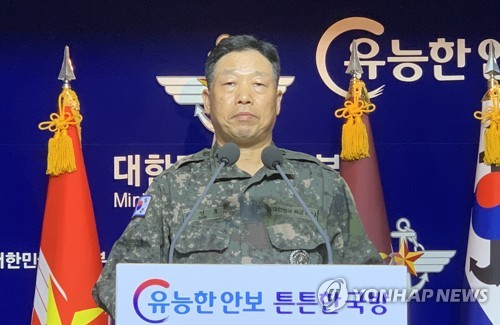 General Ahn Young-ho, head of operations at South Korea's Joint Chiefs of Staff, on Thursday confirms a fisheries official who went missing on Monday had been killed by the North Koreans. [YONHAP]


A North Korean maritime patrol shot and killed a South Korean government fisheries official who went missing in the Yellow Sea this week and then burned his body, said Seoul’s Ministry of National Defense on Thursday.

Citing intelligence, a South Korean military official told reporters Thursday the fisheries official had apparently tried to defect and that the North Koreans seem to have killed him out of fear of a coronavirus contagion.

A spokesman for South Korea’s Joint Chiefs of Staff condemned the killing of the 47-year-old official by Pyongyang and demanded punishment of those responsible.

“We sternly warn that all responsibility for the brutal act committed towards our citizen lies solely with North Korea,” General Ahn Young-ho, head of operations at the JCS, said in a ministry briefing.

The South Korean official in question, who worked for the Ministry of Oceans and Fisheries’ West Sea Fisheries Management Service, disappeared Monday from a monitoring boat with several colleagues around 2 kilometers (1.2 miles) off the coast of Small Yeonpyeong Island. The colleagues became aware of his absence at 11:30 a.m.

They reported him missing after discovering his shoes, prompting South Korean authorities to scramble a search operation at around 1:50 p.m. that afternoon.

According to a South Korean military official, a figure believed to be the missing civil servant was observed the next day atop flotsam in North Korean waters around 38 kilometers northwest of where he disappeared, wearing a life vest and looking haggard and exhausted.

A North Korean fisheries control boat approached the figure at around 3:40 p.m., and a person onboard the vessel — who was wearing a gas mask — exchanged dialogue with the castaway from a distance, the military official said.

Hours later, a North Korean patrol boat arrived and an individual on board shot and killed the South Korean official at around 9:40 p.m. The South’s military concluded the official’s body had been cremated sometime after 10:11 p.m. Tuesday, after a military surveillance device on Yeonpyeong Island detected light emanating from the area, the military official added.

“The North Korean patrol appears to have received orders to fire at the missing person, but we cannot determine who [gave the instructions],” the military official said, adding a North Korean soldier wearing a gas mask and a fireproof suit was seen burning the body with gasoline.