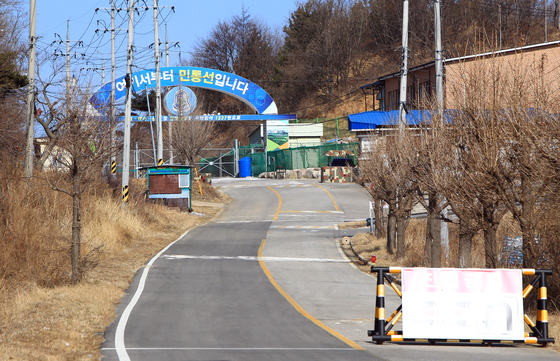 The entrance to the Civilian Access Control line in Goseong County, Gangwon, on Tuesday. [YONHAP]


A North Korean man was caught defecting at a military checkpoint in an eastern section of the inter-Korean border on Tuesday, the Joint Chiefs of Staff (JCS) said in a press release.

According to the JCS, the man was first detected making his way south at approximately 4:20 a.m. on a CCTV surveillance camera near a military checkpoint under the command of the South Korean Army’s 22nd infantry division inside a restricted area north of the Civilian Access Control line on the eastern coast.

The 22nd infantry division and local units entered a combat-ready alert level as a result of the man’s movements. After a three-hour manhunt, the man was taken into custody around 7:20 a.m.

The JCS said that the man has expressed his desire to defect to the South, and it is investigating the precise route of the man’s southbound movements up until he was caught. The JCS has not yet revealed whether the man is a civilian or a soldier.

“The JCS is also checking the surveillance posture across the border. The North Korean military has not shown any unusual moves as of now,” it added.

An anonymous military source commented, “The fact that he was caught inside the Civilian Access Control line means that he was either able to jump the barbed-wire fence or cross over in a boat without being detected in advance.”

In response to these concerns, a JCS source said, “The JCS and the Army’s Ground Operations Command is investigating the possibility that the man crossed over on the sea.”

The military vowed to improve border surveillance after a North Korean civilian was able to cross the border into the South in Goseong County, Gangwon, in November. The breach was blamed on malfunctioning sensors installed at the border fences.

A military source also raised the possibility that the North Korean man in Tuesday’s border crossing is an army deserter. North Korean army desertions increase during its annual winter exercises, according to the source.