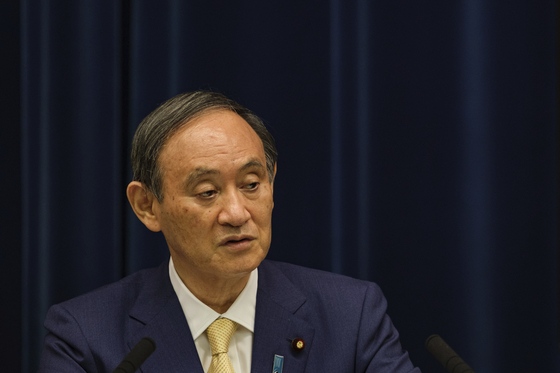 Japan's Prime Minister Yoshihide Suga speaks during a press conference at his residence in Tokyo, Thursday. Suga declared a fourth state of emergency would go in effect on Monday and last through Aug. 22. This means the Olympics, opening on July 23 and running through Aug. 8, will be held entirely under emergency measures. [AP]


The Blue House said Friday that it will keep open the possibility of President Moon Jae-in going to Japan to the last minute, after Japanese Prime Minister Yoshihide Suga said he would receive the Korean leader politely if he visits for the Tokyo Olympic Games.

“If Moon visits Japan, we will, of course, receive him with diplomatic courtesy,” Suga said Thursday, when he was asked during a media briefing if he would have a summit with Moon.

Suga said Korea had not yet decided who will attend the opening ceremony.

No summit has taken place between Suga and Moon since Suga took office last September. The last Korea-Japan summit was in December 2019 between Moon and Prime Minister Shinzo Abe.

“The Japanese government has not extended an invitation to Moon,” a Blue House aide told the JoongAng Ilbo. “Therefore, there is no discussion to arrange a trip.”

Over the past weeks, Japanese media has reported that Seoul and Tokyo are discussing the possibility of Moon’s trip.

On Thursday, Japan News Network reported that the two countries are discussing a plan for Moon to visit Japan for two-days starting July 23, the opening day of the Olympic Games.

Another presidential aide said Friday that nothing had been decided. “Our position remains unchanged that we will think about a visit, if there will be a summit and the summit will produce a productive outcome,” he said.

He left open the possibility of a trip. “There are many things we need to consider,” he said. “We will address this issue with an open attitude until the last minute.”

A senior presidential aide admitted to the JoongAng Ilbo that there is a desperate need for Moon to repair Korea-Japan relations.

“Without improving Korea-Japan relations, it is hard to get momentum to resolve other issues,” he said. “Moon has little time before his term ends, and it is true that we are desperate to restore Korea-Japan relations through a summit, taking the opportunity of the Olympic Games.”

The United States has been pressing Korea to repair ties with Japan as a precondition for its North Korea strategy.

“For years, the Moon administration used anti-Japan sentiment in Korea as a political tool,” said an opposition politician.

“Now that Moon’s term is nearing its end, the administration is reluctantly trying to restore relations with Japan in order to improve inter-Korean relations. Even if Moon has a summit [with Suga], it may end without an accomplishment, and Moon won’t be able to save face.”