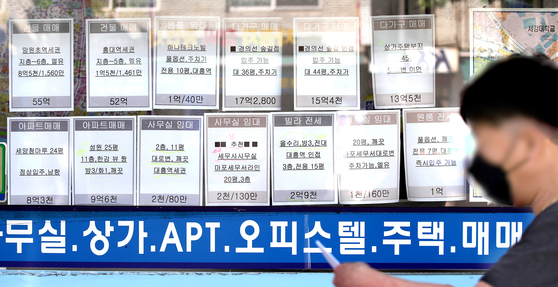 Postings on the window of a real estate agency in Mapo District, western Seoul, on Sept. 22. The average jeonse price of a one-room apartment in Seoul that is smaller than 30 square meters (323 square feet) was about 162.5 million won ($139,000) in August, a 16 percent increase from January. [YONHAP]


A 28 year old was recently looking for a one-room apartment close to work in Gwanghwamun, central Seoul. His family lives in Hwaseong, Gyeonggi, and he wanted a place that would reduce the commute. That plan fell through the second he walked through the door of the real estate agency on Sept. 19.

Earlier this year, he had visited the real estate agency in Dobong District, northern Seoul. Back then, the jeonse price for a 26-square-meter (279.9-square-foot) studio accommodation was about 90 million won ($76,900). In his recent visit, that same room was trading at about 130 million won, up almost 45 percent.

Under Korea’s jeonse system, a person puts down a large lump-sum deposit in order to live in a property for a fixed number of years. The deposit is refunded without interest at the end of the contract.

“I was about to sign a contract early this year, but postponed it when the Covid-19 pandemic got serious. I'm really confused,” he said. “I didn't take it seriously, nor did I think it would be my problem when people talked about rising real estate prices. I never imagined the price jump would affect one-room apartments as well.”

Many Koreans who can’t afford jeonse deposits are now turning to studio accommodations. The demand has been pushing jeonse prices of small rooms through the roof.

According to real estate brokerage app Dabang, the average jeonse price of a one-room accommodation in Seoul smaller than 30 square meters was about 162.5 million won in August, a 16 percent increase from January.

During the same period, the jeonse price of rooms sized between 45 to 60 square meters increased 7.6 percent to 210 million won.

The increase is most evident in Dobong District, where apartments have been relatively cheap.

The average jeonse price of an apartment smaller than 30 square meters in Dobong District was about 128.3 million won in August, a 57 percent increase compared to January.

The recent rise in jeonse prices of one-room apartments may be due to tenant protection laws passed in July. The law forces landlords to renew contracts and limits price increases.

Also, more homeowners are shifting from jeonse to monthly rent. The number of jeonse transactions of the tiny accommodations in August was only about 8,558, a 23 percent decline compared to last month.

Jeonse loans, which are a relatively easy option for tenants, are another driving force behind the price increases.

“As interest rates for jeonse loans are only about 2 percent a year, landlords who want to raise the jeonse prices are even suggesting tenants borrow money from banks,” said a real estate agent in Jungnang District, eastern Seoul.

Jeonse prices of officetels are also increasing at a rapid rate.

According to Sangga Jeongbo Research Center, officetel jeonse prices were 14.61 million won per pyeong in August, a 490,000 won jump in a month. A pyeong is 3.3 square meters.

“As government regulation on loans now also applies to people with only one apartment, demand for jeonse has been spiking recently,” Shim Gyo-eon, a real estate professor at Konkuk University, said. “In order to cool down the jeonse real estate market, [the government] should approve deregulation on loans below 900 million won so that people who are really in need can purchase houses.”