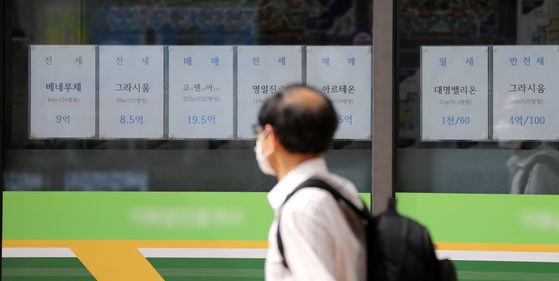 
Despite tightened regulations, real estate prices are still on the rise as a shortage of available apartments increases demand.

There were a total of 38,559 apartments up for sale in Seoul as of Aug. 10, down 11.3 percent compared to a month earlier, according to data compiled by real estate information provider Asil. In Gyeonggi, the number of available apartments declined 9.9 percent during the same period, while in Incheon it declined by 13.8 percent.

Since the government increased capital gains tax rates for multiple homeowners, more people are either choosing not to sell their properties or increase prices dramatically. Giving them away to family members has been another popular choice; 1,698 apartments in Seoul were given as gifts to family members in June, a 35 percent increase from the previous month.

Starting June, the maximum ceiling on the capital gains tax was raised to 75 percent, up from 65 percent, for those who own three or more apartments in designated areas. Combined with the additional taxes levied by the local governments, multiple homeowners who have more than three apartments are obliged to pay some 82.5 percent of gains as taxes.

According to the Korea Real Estate Board, the index measuring the supply and demand for property in Seoul was 107.9 on Aug. 2, the highest figure since the first week of March, when the index hit 108.5. When the index is higher than 100, it signals that there are more buyers than sellers, and vice versa for values below 100.

“People who wished to sell their properties did so before June when the new law went into effect,” said a real estate agent in Seoul. “As the market has not got enough available properties, multiple homeowners expect that prices will rise further in the future.”

“People who own properties near the Cheongna International City station are raising the prices drastically with the news that the construction of subway line No. 7 at the station will start within the year,” said a real estate agent near the station.

An 84-square-meter apartment in Indeokwon Prugio El Centro apartment complex in Anyang, Gyeonggi, is currently up for sale at 2.2 billion won. The same-sized flat changed hands at 1.63 billion won in June, a 35 percent difference in about two months.

Indeokwon Station is expected to be one of the stops on the Great Train Express, new generation of high-speed railway that can reach a maximum speed of 180 kilometers per hour (112 miles per hour) scheduled to open in 2023.

A 110-square-meter flat in Magok M Valley 7 Danji apartment complex in Magok, western Seoul, is up for sale at 1.9 billion won while the same-sized flat was sold at some 1.49 billion won in July. Lotte Engineering & Construction is planning to build a hotel and convention center near the complex.

“Homeowners are calling for prices that are too high,” said a real estate agent near the complex. “When an apartment is up on sale at a relatively low price, competition gets very intense among buyers.”

Experts say the current situation will last for a while.

The ruling Democratic Party is pushing to further increase the capital gains tax, which will likely push down the number of properties on sale.