Kia Tigers' pitcher Aaron Brooks took to social media to thank his fans and fellow players in the KBO for their support for his son, who is recovering from injuries sustained in a recent auto accident.

In a video clip posted on his Instagram page Friday, Brooks and his wife, Whitney, provided an update on Westin, who was seriously hurt in a crash caused by a driver running a red light in Kansas City earlier this week. Brooks left the Tigers to be by his family. Whitney and the couple's daughter, Monroe, escaped with relatively minor injuries, and Westin took the brunt of the hit. 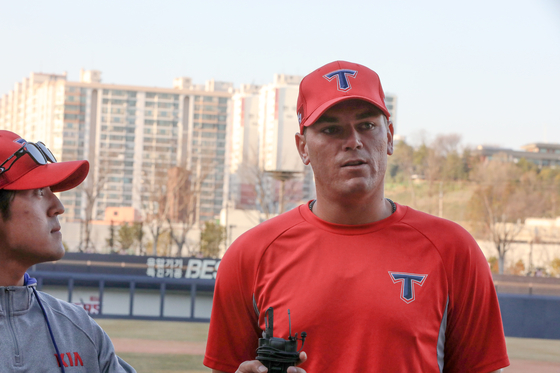 "If and when you see the picture of the car, it's a miracle that they're all here, especially Westin," Brooks said. "We're doing as well as we can as a family. We're so thankful for everyone's support. I think it's what's keeping us somewhat sane through this. Obviously, it's hard for any parent to go through something like this. We're just trying to stay strong for Westin and just let him know it's going to be okay.”

Brooks said his son is "a trooper" as he battles through his injuries. Whitney said Westin was supposed to be intubated for 48 hours but that he was already out of the intensive care unit.

"Every time doctors come in, they're blown away, literally in awe of how well he's doing," Whitney said. "It's because of the prayers. We really appreciate it. It's so overwhelming, the love and support that we have. I wish I can line you guys up and give you hugs personally because you deserve it."

Whitney said she has completely forgiven the driver who crashed into her car by running a red light because she believes it was an accident, and pleaded with her supporters to do the same.

"I think he has enough guilt in his life...He stood there and watched them pull the kids out of the car. That's enough for a person," she said. "I pray that he's okay, too. I want anybody who's holding on to any grudge against him [to] let it go. It's not worth it. We need to be thankful that Westin is with us and that he's progressing so well.”

Whitney said Westin loves pictures and videos with messages of support for him, including the one of Tigers players holding up the "W" sign for his name when they get on base, and asked followers to keep sending them pictures and videos.

With his young son still "not out of the woods," baseball remains well down the list of priorities for Brooks.