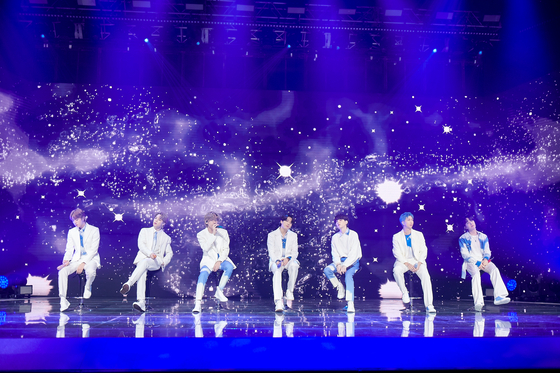 
Lotte Duty Free held a family concert on Sunday in celebration of the company's 40th anniversary.

The 90-minute show was viewed 2.2 million times in total, with a maximum of 550,000 people watching the initial broadcast.

The performance was filmed beforehand due to Covid-19 and was shown on YouTube for free.

Viewers were required to sign up for Lotte Duty Free in order to access the online concert. Lotte Duty Free said new signups totaled 900,000 people from Aug. 31 through Sept. 25.

Forty-four percent of the new members were from Southeast Asian countries, including Indonesia, the Philippines and Vietnam, while those from America and Europe accounted for 38 percent. Those in their 20s accounted for the largest population with 43 percent, followed by 37 percent that were in their teens.

The company “hopes this year’s family concert helped in overcoming the worldwide Covid-19 by even just a little,” said Lotte Duty Free CEO Lee Gap in a statement on Monday. The company will “contribute to the development of Korea's retail and tourism industry by providing differentiated services to customers using cultural marketing and actively attracting foreign tourists.”

Lotte Duty Free has held the family concert, attended by K-pop stars, since 2006. This was the first time it took place online. The performance was translated into six languages, including English, Chinese and Vietnamese.

In October, videos featuring each member of BTS will be showcased on the company’s YouTube channel.