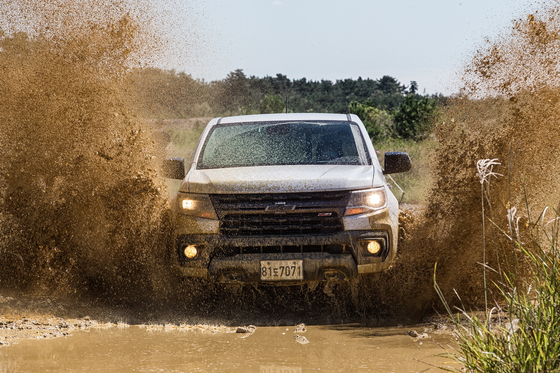 With the camping craze in full swing in Korea, the launch of this partially revamped version of the Colorado pickup truck seems to be very timely.

GM Korea brought the new version to Korea just one year after it debuted the American pickup truck here for the first time in 2019.

While there was some skepticism over how well the pickup truck would appeal to Korean customers who have generally preferred luxurious sedans and more recently sports utility vehicles, Colorado’s sales figures actually exceeded expectations.

It sold 3,078 units in the first half of this year, making it the fifth most sold model in Korea’s imported car market after the Mercedes-Benz E-Class 300 4MATIC, E-Class e250, Volkswagen’s Tiguan and Ford’s Explorer.

The face-lifted version came with a redesigned black grille and a larger bumper to emphasize the strong demeanor of the truck. The rear is now engraved with "Chevrolet."

The new Colorado also has a new trim called Z71-X, a premium trim in the lineup that comes with a few design features like a black bowtie emblem and Z71 badge on the grille.

Function-wise, it comes with options like Hill Decent Control that helps the car to safely descend on steep hills and Transfer Case Shield, which protects the powertrain on bumpy roads.

To check out what this vehicle is capable of, the Korea JoongAng Daily got behind the wheel of the Z71-X trim last week.

The courses were driven on auto mode, instead of testing the car's more specific driving modes, in order to test the most basic functions of the vehicle's off-road performance.

At speeds slower than 30 kilometers (19 miles) per hour, the car navigated through deep and thick muddy puddles without slipping or sinking. It was also able to cross a river with water easily reaching the car's bumper. According to Chevrolet, it can drive through water up to 80 centimeters (31 inches) deep. 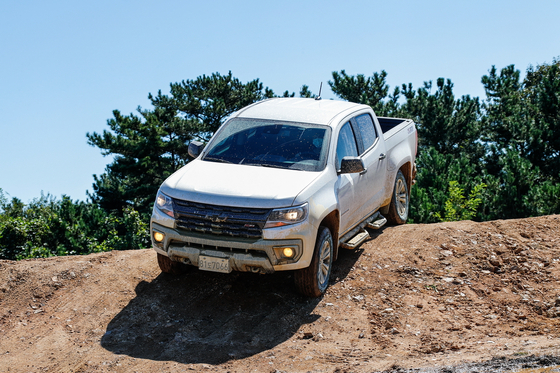 
Driving down a 35-degree hill in the Colorado really feels like driving off a cliff as the road is not visible from the driver's point of view. With the help of the Z71-X's Hill Decent Control, however, the car controlled its speed on its own without the driver having to press the brake and reached flat ground safely.

Driving a course with deep pits and bumps was similarly safe and stable. With the help of the mechanical locking differential system, the vehicle adequately distributed power to the wheels that needed the most resistance.

The course also included a section towing a 500-kilogram (1,100-pound) caravan. The screen on the center console provided a rear view when necessary to check on the caravan. Chevrolet said the Colorado has the capacity to tow a caravan that weighs as much a 3.2 tons.

Despite its obvious off-road credentials, the Colorado still holds its own on paved roads. The relatively heavy handling could be seen as a plus for those who enjoy a more stable ride. Mixed in among all the river-fording and cliff-climbing features is a basic driver assistant system, which warns the driver through the head-up display if the car is about to collide with an object or is veering out of its lane.

There are hardly any rivals to the Colorado in Korea, with the one exception of SsangYong Motor's Rexton Sports. The model launched in 2018 and has been selling more than 40,000 units each year. In the first half of this year, however, it sold 15,781 units, down 27 percent compared to the same period last year.

GM Korea to bring GMC products to the market this year