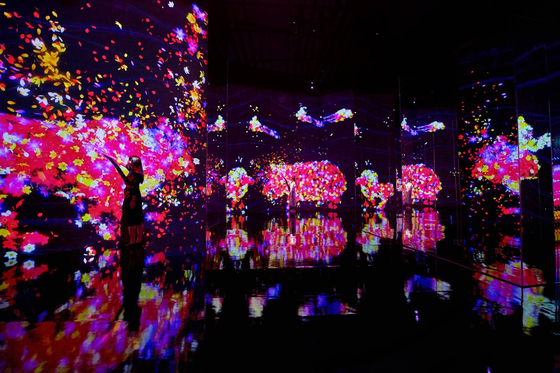 
Amid heated controversy over whether Instagram-friendly, spectacular digital images are now a field of contemporary art or just high-tech attractions, one of the world's most famous collectives for such works, teamLab, started a solo exhibition at the Dongdaemun Design Plaza (DDP) in central Seoul on Friday.

teamLab, which was formed in 2001 in Tokyo and now consists of hundreds of artists, engineers, programmers, computer graphic animators and other experts, presents 10 pieces of animated large-scale digital works, under the theme of "Life."

"teamLab expressed the intention to emphasize their aspect of an artist in this show," explained Bae Ji-woon, executive director of the entertainment company Culture Depot, which hosts the exhibition. "Accordingly, they wanted to present works in a consistent theme, rather than a selection of their most popular works. Amid such discussion, the Covid-19 pandemic broke out. So we agreed to set the theme of the show as 'Life' which features works that deal with the relationship between nature and civilization. It will help people, tired of the pandemic, find some relief and think about nature and humans."

Among the works, "Animals of Flowers, Symbiotic Lives II," shows various animals, formed with seasonal flowers, running and flying. When the viewer touches an animal, the flower petals scatter and the animal fades away, suggesting the danger of human intervention on the ecosystem. "The artwork is not a pre-recorded image that is played back: it is created by a computer program that continuously renders the work in real time," teamLab wrote on its website. "The interaction between people and the installation causes continuous change in the artwork." 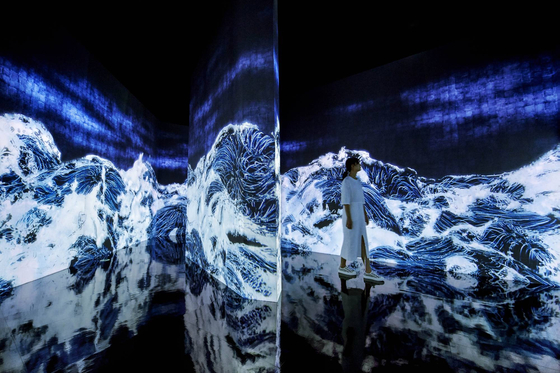 
Another work "Black Waves: Immersive Mass" shows a large-scale but actually "a single, continuous" wave, whose picturesque rendering is reminiscent of the 18th-century ukiyo-e, or Japanese woodblock prints and master Hokusai's "The Great Wave off the Kanagawa." With music, the work leads the viewers into meditation.

The exhibition runs through April 4, 2021. It is open through the Chuseok holidays but is closed on Oct. 5. Admission is 20,000 won ($17.05) for adults. Reservations are recommended as the number of visitors is limited due to the ongoing social distancing regulations amid the Covid-19 pandemic. Go to Dongdaemun History & Culture Park Station, line No.2, 4 and 5, exit No.1.