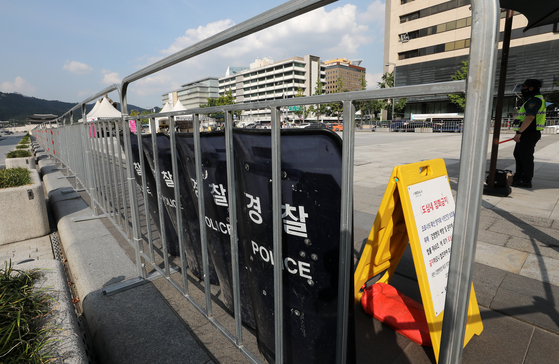 Seoul’s police chief Monday threatened to suspend or revoke the driver’s license of anyone who participates in a so-called car rally anywhere in the capital on Foundation Day this Saturday, as anti-Moon Jae-in activists refuse to comply with government social distancing rules.

Several right-wing civic groups have been vowing to protest the president and his administration this weekend by taking their cars out onto streets and shouting from their vehicles — a car rally. The plan came in response to the Seoul Metropolitan Government’s ban on any congregations of 10 people or more through Oct. 11 to prevent the spread of the coronavirus.

The Seoul Metropolitan Government has also designated no-rally zones in several parts of downtown Seoul, including in Jongno District, where even rallies of fewer than 10 people are prohibited.

The car rally was designed to evade any chance of transmitting the virus, but the Seoul government and police claim virus transmission can still occur in the process of organizing the events — plus the fact that long lines of cars would seriously disturb traffic.

Even Prime Minister Chung Sye-kyun weighed in last week, saying any participant in massive car rallies would encounter “zero tolerance” by law enforcement — and possibly get arrested or have their license revoked, or both.

In a press conference Monday, Jang said if car rally protestors refuse to follow orders from police officers to disperse three times, they will be slapped with 40 penalty points, enough to get their licenses suspended. If they cause damage to roads or disturb traffic by setting up obstacles, they will receive 100 penalty points, he said, enough to get their licenses revoked.

A large anti-Moon rally held in Gwanghwamun, central Seoul, on Liberation Day on Aug. 15 has often been cited by government agencies trying to block protests in Seoul, as more than 600 coronavirus patients have been linked to that rally. 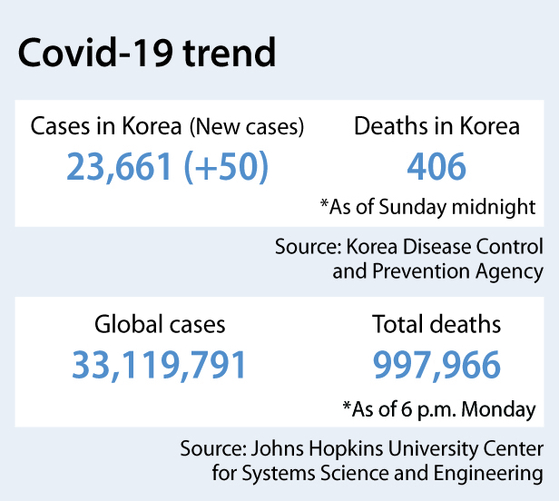 Korea added 50 new cases of virus infections Sunday, the Korea Disease Control and Prevention Agency (KCDA) announced Monday morning, the lowest day-to-day figure in 47 days. Health authorities, however, barely celebrated the drop, saying daily cases on Saturday through Tuesday tend to be lower than other days of the week because fewer people get tested over the weekend.

It normally takes about one or two days for a test result to be confirmed.

Of Sunday’s 50 new cases, 40 were local infections: 19 in Seoul, 13 in Gyeonggi, three in North Gyeongsang and one each in Busan, Incheon, Ulsan, Gangwon and North Chungcheong.

Among the rest, which were imported, two were from Uzbekistan and one each from India, Indonesia, Nepal, Kuwait, Qatar, Malaysia, Turkey and Canada.

Five people died Sunday, raising total deaths to 406, while 44 people recovered, bringing total recoveries to 21,292. As of Sunday at midnight, a total of 23,661 people have been diagnosed with the virus in Korea.

As the government investigation into faulty free flu shots continue, the KDCA said Monday that one person among 407 people across 10 metropolitans and provinces reported feeling “pain” on the skin where the needle was injected. The KDCA said no other “unusual symptoms” have been reported, and that it was unclear whether the patient received a shot that was left at room temperature.

On Sept. 22, the KDCA announced that a government project offering free flu shots to the nation’s old and young had been abruptly halted after health authorities detected problems in deliveries. Some vaccines were left at room temperature as they were being shipped instead of being refrigerated. At the time, the KDCA said the vaccines in question had not been administered to anyone.

Three days later, the KDCA backtracked on its earlier statement that the vaccines weren’t administered to anyone, saying some medical facilities claim they didn’t receive the notification not to use the flu shots and gave them to patients.