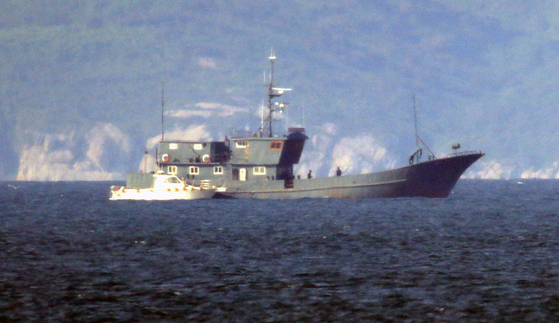 In this file photo, a North Korean patrol boat is observed near the North's Daesuap Island from the South's Yeonpyeong Island on June 21, 2020. [YONHAP]


South Korea was listening in on North Korean military communications when the regime ordered its soldiers to shoot and kill a missing fisheries official found at sea but did nothing, sources from the National Assembly said Tuesday.

According to the sources from the National Assembly's National Defense Committee and Intelligence Committee, the military was eavesdropping on North Korean communications on Sept. 22. Around 3:30 p.m., the North discovered a South Korean civil servant floating in its waters. The man, surnamed Lee, went missing the previous day while on an inspection at sea.

"We did not announce it because of concerns about our relations with North Korea, but we wiretap and eavesdrop on the North's communications in real time," a source from the National Defense Committee told the JoongAng Ilbo. "We eavesdropped on the communication that a [North Korean patrol boat] was reporting to the Naval Command."

According to the sources, a written report was sent to President Moon Jae-in around 6:36 p.m. on Sept. 22 that the missing Lee had been captured by the North Korean military.

The North's Naval Command issued an order to the soldiers after 9 p.m. to open fire to kill the man, the sources said, based on the eavesdropped communications.

In an interview with TBS Radio Tuesday morning, Rep. Min Hong-chul of the ruling Democratic Party (DP), who is chairman of the National Defense Committee, admitted that the South Korean military was listening to the North's communications.

"[The patrol boat that found Lee] asked its upper chain of command what it should do with him," Min said. "During this course of reporting, an order was issued to open fire at him. I was briefed that a speedboat came and shot him."

Later in the day, Yonhap News Agency reported some details of the eavesdropped communications, quoting sources in the National Assembly. "I want to confirm it again," a North Korean captain asked the command, the sources told Yonhap. "Shoot and kill? Is this real?"

Min, however, told the JoongAng Ilbo on Tuesday that he did not want to confirm the report.

A source from the Intelligence Committee said soldiers on the North Korean patrol boat were debating whether or not they were ordered to shoot and kill Lee. "It is true that there was such a dialogue," he said.

Another source from the National Defense Committee also told the JoongAng Ilbo that the North Korean soldiers had discussed the shoot-and-kill order.

According to the sources, the military heard the North Korean patrol boat reporting to its chain of command that the man was shot and killed around 9:40 p.m.

"Before Lee was killed, the military should have made efforts through the United Nations to repatriate him," a source from the National Defense Committee said.

The military spent nearly an hour before informing the Blue House around 10:30 p.m. of Lee's fatal shooting. Concerned ministers held an emergency meeting at 1 a.m. on Sept. 23, and President Moon was briefed about the situation at 8:30 a.m.

The South Korean military also confirmed through the eavesdropped communications that Lee apparently had a conversation with North Koreans nearby, which contradicts North Korea's assertion to the South on Friday that it only talked to him from about 80 meters (260 feet) away.

The eavesdropped communications showed that Lee told the North that he wanted to defect, suggesting that the two sides had a conversation at a relatively close distance. Experts have said having a dialogue at sea about 80 meters away is difficult due to the sound of waves and the North Korean ship's engine noise.

According to the eavesdropped communications, the North Korean soldiers initially had the intention of rescuing Lee.
The source said North Korean soldiers first used a rope to tow Lee, who was reportedly wearing a life jacket and was on a floating object, to land. They, however, lost him in the waters.

After two hours searching, they discovered Lee again and held onto him. The situation, however, changed around 9 p.m. when the Naval Command ordered them to shoot and kill him.