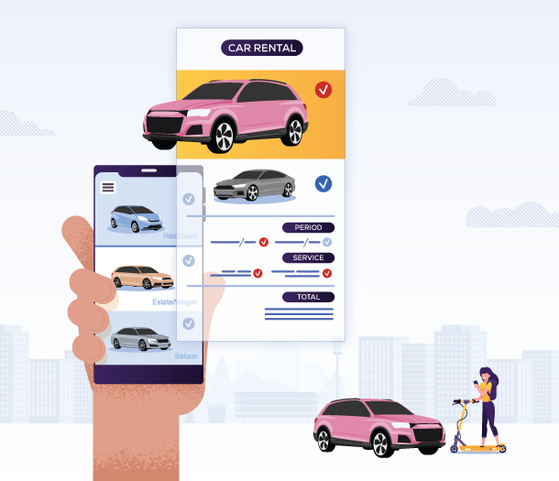 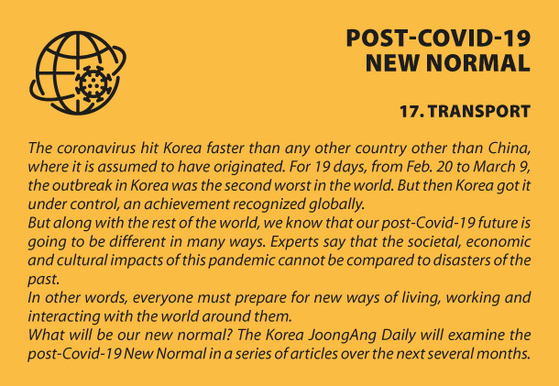 There can't be many cities with more comprehensive public transport than Seoul.

Buses and subways travel to every nook and cranny of the city and are well-managed and affordable.

But when you add a pandemic to the picture, things get a lot more difficult.

Having a bus stop on every street corner and jam-packed subway trains crisscrossing the city went from the gold standard of good city planning to a potential hotbed of contagion practically overnight. When Covid-19 became a nationwide issue in February, people quickly turned their backs on public transportation.

According to the Seoul Metropolitan Government, the operator of the majority of subway lines and buses in Seoul, the number of subway journeys fell to 139 million in March, a 40.3 percent drop from the year before when 233 million trips were taken.

In January, when the virus was still confined to China, the number exceeded 207 million. Up until August, subway usage had still not recovered, with 152 million rides.

Instead, demand for other mobility services shows a significant increase, and the way people use car-sharing and rental services has also changed.

“The pandemic will provide momentum for mobility services to grow as people who didn’t think about them in the past with such effective public transportation began to open their eyes to see what other options are actually out there,” said Kim Pil-soo, an automotive engineering professor at Daelim University.

Subscriptions on the rise

The pandemic gave a boost to car subscription services, long deemed unlikely to gain a foothold in Korea.

Mobility subscription services allow users to pick and choose the car they want under a certain membership. The more expensive the membership is, the more luxurious and varied the model options get.

"Before the pandemic, subscription services for vehicles didn't get much spotlight," Kim said.

"Ownership of vehicles was still considered a sign of wealth and such subscription services didn't serve that purpose."

Covid-19, however, increased demand for private vehicles where there is no danger of being in contact with somebody else, but not everybody had the financial means to go out and buy a car right away.

Hyundai Motor, the No. 1 carmaker in Korea, said the number of new members to its flagship subscription program called Hyundai Selection recorded a 615 percent jump in April compared to the month before, going from 39 to 279.

The expansion of subscribers was similar for the Kia Flex subscription program operated by its affiliate Kia Motors.

Hyundai Selection’s monthly fee ranges from 590,000 won ($510) to 990,000 won, which gives the users the choice of two to seven models from the carmaker. A single membership can even be shared with other people, which drags down the monthly fee even further.

Responding to the rising demand, Hyundai Motor expanded its service in April and June, adding to its lineup and including vouchers for electric scooters and taxis.

"Although a minor part within Hyundai Motor's business, the fledgling mobility service with its potential could be valued at 16.2 billion won," said Kim Gwi-yeon, an analyst at Heungkuk Securities.

"The subscription program greatly drops the initial cost of owning a car compared to purchasing a car such as consumption tax, and you don't have to worry about insurance fees as well, which are included in the subscription fee."

A similar trend was spotted in the rising popularity of Socar, the car-sharing start-up with the highest number of clients in the country.

Its Socar Pass subscription program had garnered 300,000 subscribers as of September, collecting half of its members in the six months since March.

The program allows users to drive vehicles from the Socar fleet at a discounted price with certain subscription fees.

For example, at a monthly fee of 14,900 won, subscribers can drive 12,000 vehicles from the Socar fleet as much as they want at 50 percent discounted prices.

Changing patterns have been spotted in the way people consume existing services, such as regular car-sharing programs or legacy rental car services.

Socar, which provides cars for a minimum of 30 minutes and charges for every additional 10 minutes, says the average time people borrow cars for has increased greatly since the outbreak of the coronavirus.

"As people seek more personal mobility, the average amount of time people drive has increased, going from a short-distance drive to a longer one," said Jeon Ji-soo, a public relations manager at the car-sharing start-up.

"Switching cars frequently will also expose them to the risk of being infected."

According to Socar's analysis, people starting their journeys from the greater Seoul area and traveling to Gangwon, one of the most popular vacation sites in Korea, accounted for 44.9 percent of the Socar fleet in May, 11.5 percentage points more than the same period last year.

On the other hand, people who just used Socar vehicles to travel within the region, which means they traveled there through other means such as KTX or buses, dropped to 51 percent, down from 62.9 percent last year. 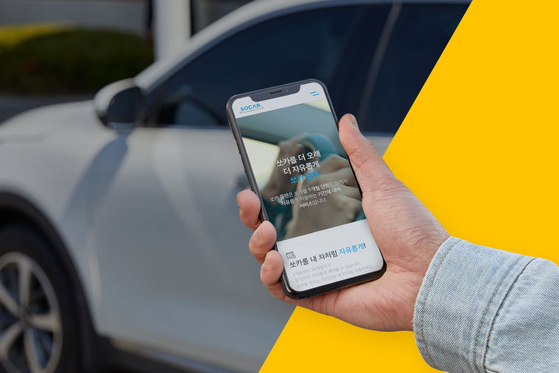 
Micromobility on the rise 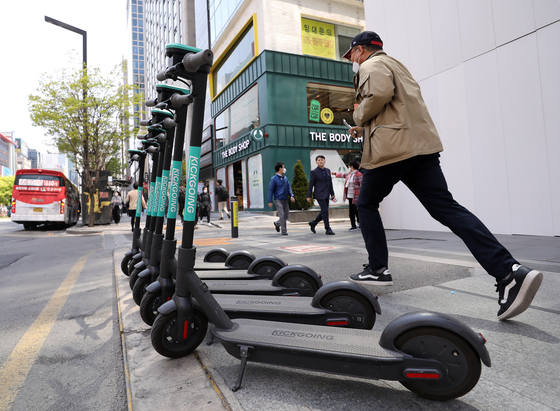 Kickgoings, one of the electric scooter brands operating in Korea, are parked on a roadside. [OLULO]


Just a year ago, micromobility solutions represented by electric scooters and bikes were newfangled devices that might be fun to try out in the park, but certainly not legitimate means of getting from A to B.

In the Covid-19 era, however, when people are looking for affordable and solitary transportation options, these micromobility solutions have become increasingly popular.

"I don't have a driving license, but I didn't want to get on the hectic subway line No. 9 where you literally and unavoidably have to come in physical contact with multiple passengers at commuting times," said Kim Hyun-joo, an office worker who has to commute 40 minutes to work by subway every morning.

"I started riding Ttareungyi [a public bike rental service run by Seoul city] in the busiest zone, and surprisingly it was quite nice. I also ride electric scooters when I have to go to the supermarkets instead of riding buses. I don't think I will go back to riding the subway as much as I used to now that I realize that it is possible to take other means to the office. If it weren't for the coronavirus, I don't think I would have bothered to try it out in the first place."

Olulo, the operator of electric scooter platform Kickgoing, saw the number of members of its service grow at an accelerated pace after the coronavirus broke out. The mobility company started the electric scooter platform in September 2018 and had gained 450,000 users as of January 2020. It added 150,000 new users in the first five months this year and another 300,000 users over the next five months.

"Electric scooters come in handy to ride that 'last mile' from the station to the doorstep of your house," said Park Yeo-jin, a public relations manager at Olulo.

"With the coronavirus, it was also highlighted because it is a personal mobility solution where you don't need to come in contact with anybody."

A similar trend is also visible in the use of bicycles — electric or otherwise.

Kakao Mobility, a subsidiary under Kakao that handles mobility services such as taxis, bicycles and navigation, says people who ride on their electric Kakao T bikes rose exponentially after the outbreak of Covid-19 in March.

It says the number of journeys per bike between April and July rose by 27 percent on year on average per month.

"What people need translated into new types of demand," wrote Kakao Mobility in its latest report. "Bikes have been with us for a long time, but has been newly received lately with the coronavirus."

Ttareungyi rented out its bicycles 6.17 million times between March and May where social distancing schemes from the government were implemented for the first time. This is a 582 percent jump from the same period last year.

The emergence of such new mobility solutions will vitalize the industry, leading to fundamental changes in the industry.

"The latest pandemic has lead people to think that such crises could happen at any time, and consequently people will continue to use such mobility solutions," said Lee Ho-joong, principal researcher in the technology policy department at the Korea Automotive Technology Institute.

"Product and service development will follow such demand and the trend will likely continue for a while longer."