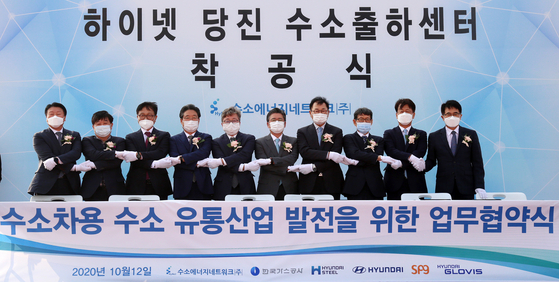 
Hyundai Glovis is developing infrastructure that it says could improve the efficiency of delivering hydrogen from factories to charging stations through a partnership with five other companies.


The logistics arm of Hyundai Motor believes it could help reduce the price of charging hydrogen vehicles by 20 percent starting next year.

Hyundai Glovis will deliver hydrogen produced at Hyundai Steel’s Dangjin factory to HyNet’s charging stations using its specialized delivery vehicles, which can carry up to 340 kilograms (750 pounds) per trip.

Currently, there isn’t a sophisticated system for delivering hydrogen to charging stations, according to Hyundai Glovis. This made it difficult to estimate the exact timing of when to refill hydrogen charging stations.

Hyundai Glovis plans to create infrastructure that relies on data to automatically generate alerts that hydrogen needs to be delivered.

Currently, the price of hydrogen per kilogram is around 8,000 won ($7). Hyundai Glovis believes the new infrastructure could lower the price per kilogram to the 6,000 won range.

A kilo of hydrogen can power a vehicle for up to 100 kilometers (62 miles).

Hyundai Glovis plans to supply hydrogen to charging stations that are within 150 kilometers of Dangjin. It plans to expand coverage nationwide, and eventually worldwide. The company said it will customize infrastructure depending on each country's level of hydrogen development.

“To pull forward the realization of hydrogen economy, having a stable supply of hydrogen is essential,” said a spokesperson for Hyundai Glovis in a statement. The company “plans to show competitiveness as a global logistics company in solidly keeping the advance status of hydrogen economy.”

As part of the effort to join the hydrogen economy, Hyundai Glovis plans to gradually convert current diesel delivery trucks to hydrogen trucks starting as early as the first half of next year.

Hyundai Motor expands business in Indonesia with its EVs