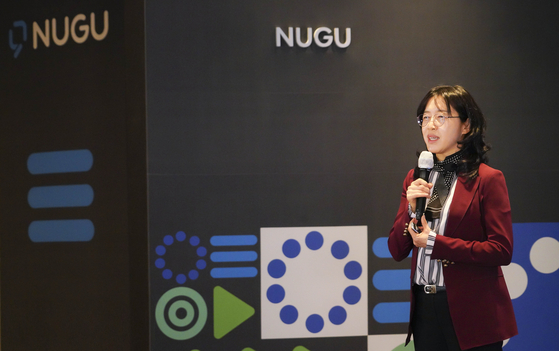 
SK Telecom has incorporated its artificial intelligence (AI) assistant Nugu into its dialer app to allow users to make phone calls and sift through call logs with voice commands.

The new feature was included in an update to the company's T Phone app Wednesday.

The mobile carrier said that it will add a wide range of services encompassing delivery and payment to the app powered by the Nugu system throughout next year.

“We are aiming to turn it into a business platform by letting users do shopping and use food delivery services,” said Park Myung-soon, senior vice president and head of AI business office of SK Telecom.

Also in the cards is a feature to automatically convert voice into texts or vice versa during phone calls.

“Let’s say you are in the library and the phone rings,” said Kim Young-joon, with SK's AI business office, during an online press event on Monday. “Without hanging up the call, you could use the function to turn the voice into texts and respond by converting text to voice."

The Nugu-backed T Phone could be paired with wireless earbuds, dubbed Nugu Buds, that will hit the market in November.

Park said that the price will be lower than the 100,000 won ($87) range, although the exact price won't be revealed until closer to the release date.

Available across carriers, the T Phone app had 12 million monthly active users as of September, according to the mobile carrier.