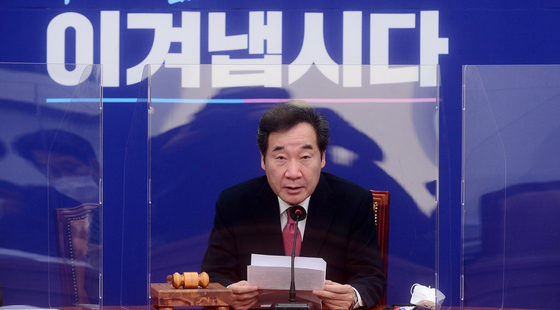 Chairman Lee Nak-yon of the ruling Democratic Party speaks during the Supreme Council meeting of the party on Monday. [YONHAP]


Leaders of the ruling and opposition parties on Monday continued to trade barbs over accusations that allies of President Moon Jae-in were involved in a pair of large-scale financial fraud scandals.

“Many suspicions without clear grounds were raised [against members of the ruling party and the administration],” Chairman Lee Nak-yon of the ruling Democratic Party (DP) said during the party’s Supreme Council meeting in the morning. “We will fight against groundless lies and attempts to exaggerate the scandals.”

Lime and Optimus have together been unable to return more than 1 trillion won ($838 billion) in customer funds. The country’s financial regulators have said they suspect the money is unavailable due to bad investments, Ponzi scheme-like structuring and possible fraud.

Suspicions have been raised that operators of the funds lobbied key members of the Moon administration and the ruling party.

Last week, DP Chairman Lee was accused of having received illegal financial assistance from an affiliate of Optimus. Since February, the company had paid monthly rental fees for a digital fax machine in Lee’s office, sources in the political community told the JoongAng Ilbo.

In a statement on Wednesday, Lee admitted to the practice, but said it was an administrative mistake. Lee said the printer was borrowed through a friend of a volunteer ahead of the April 15 general election campaign, and his office became aware of its link to Optimus only after media reported on it.

The National Election Commission said Monday it is looking into the allegation that Lee had violated the Political Fund Act by allowing the Optimus affiliate to pay the printer rental fee.

The main opposition People Power Party (PPP) has said the printer is only a glimpse of the links between Lee and Optimus. “This is not just a simple mistake,” Rep. Bae June-young, spokesman of the PPP, said. “Over 1,000 investors have lost over 500 billion won in the Optimus fraud. The victims are paying close attention to Lee’s suspected connection to the company.”

Rep. Kwon Young-se of the PPP said the current law bars business corporations from making donations to politicians. “It is necessary to have an investigation if Optimus had lobbied Lee,” he said.

In a separate scandal surrounding Lime Asset Management, a former Blue House aide was accused of having received a bribe from a key suspect in the financial fraud that effectively brought down the hedge fund.

Last week, Kim Bong-hyun, a suspect in the Lime Asset Management’s frauds, gave sworn testimony in a courtroom when he appeared as a witness of his co-conspirator Lee Kang-se. Kim said he had given a 50 million won bribe to Kang Ki-jung, then senior presidential secretary for political affairs, in July last year through Lee.

Kang has denied Kim’s testimony, and filed a criminal complaint with the prosecution on Monday. While admitting that he had met Lee, Kang said he never received any money, urging the prosecutors to investigate Kim on charges of perjury and defamation.

The PPP said Monday that the prosecution must demonstrate its willingness to go after powerful politicians.

“The prosecutors appeared to be delaying the probes,” Kim Chong-in, acting head of the PPP, said. “When Moon appointed Prosecutor General Yoon Seok-youl, Moon told him to not be afraid of investigating powerful figures. But right now, the investigative powers are held by Justice Minister Choo Mi-ae, not Yoon.” 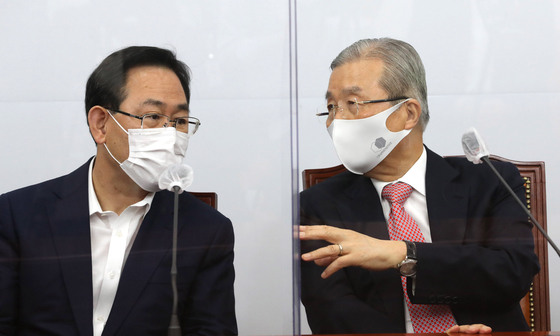 
Rep. Joo Ho-young, floor leader of the PPP, demanded that Yoon replace the current investigation teams and form special teams, or that an independent council be appointed to lay bare the truth.

“Only then can they get to the bottom of the suspicions, and the people will accept the probe outcomes,” Joo said.

Meanwhile, sources in the prosecution told the JoongAng Ilbo on Monday that the Seoul Central District Prosecutors’ Office, which has been investigating the suspected financial fraud at Optimus, asked the Supreme Prosecutors’ Office to add four more prosecutors to the team.

The request was made after Prosecutor General Yoon ordered the team to also investigate allegations that Optimus had lobbied top politicians and government officials. Over the past months, the Seoul district prosecutors have only looked into financial crimes allegedly committed by Optimus operators

A senior prosecutor told the JoongAng Ilbo that the district office’s willingness to go after top politicians can be assessed by the choices of additional prosecutors.

“Many of the prosecutors on the current team handling the Optimus case have no experience investigating financial crimes and illegal lobbying activities,” the source said. “If the four additional prosecutors also do not have such experiences, you can say that Lee Sung-yoon, head of the Seoul Central District Prosecutors’ Office, has no intention to get to the bottom of the scandal.”