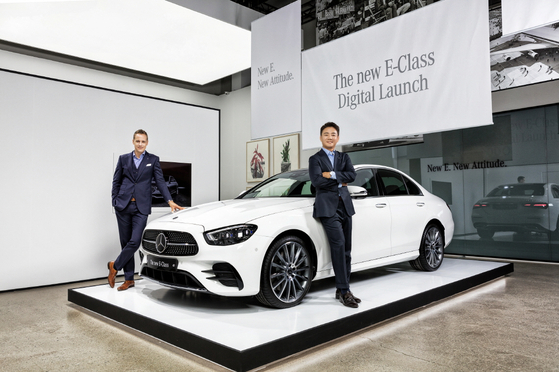 
Mercedes-Benz launched a face-lifted version of its best-selling E-Class midsize sedan in Korea on Oct. 13, which is expected to play a big role in cementing the German carmaker’s No. 1 position in the country’s imported car market.

The E-Class is the most popular imported model in Korea. Sales of E-Class Benzes surpassed the 100,000 mark last year, which no other imported car model has achieved.

In the first half of this year, 14,000 E-Class Benzes were sold, making it the most popular imported car during the period.

To repay such devotion, Mercedes has come up with some technologies for the new E-Class lineup that are exclusive to the Korean and Chinese markets.

The new E-Class shown in an online launch event Monday was sportier and younger in design. The front has gone through a major revamp, with redesigned, rounder LED headlights.

The company said its customers in Korea have gotten younger over the years, with people in their 30s accounting for 36 percent of E-Class sales in 2017 compared to 27 percent in 2011.

Technology-wise, the car comes with a touch-sensitive steering wheel, the first in the Mercedes lineup, with sensor mats around the rim allowing for driving assistance functions to more precisely detect whether the driver's hands are on the steering wheel. The spokes on the steering wheel also have touch pads instead of analogue-style buttons.

A large 12.3-inch infotainment display offers a new augmented reality navigation system, the first to be offered in the E-Class lineup.

For Korea and China, two of the biggest markets for the E-Class sedan, Mercedes-Benz is offering what it calls an Air Quality Package, which monitors the quality of air in and outside of the vehicle on a real-time basis and activates an air purification system to maintain the air quality within the car at a certain level.

The new E-Class will come in six types of engine variants for Korean customers including gasoline, diesel and plug-in hybrid.

Mercedes-Benz Korea will start selling the new E 220 d 4MATIC, E 250 and E 340 4MATIC in October while the PHEV and AMG models will follow later.