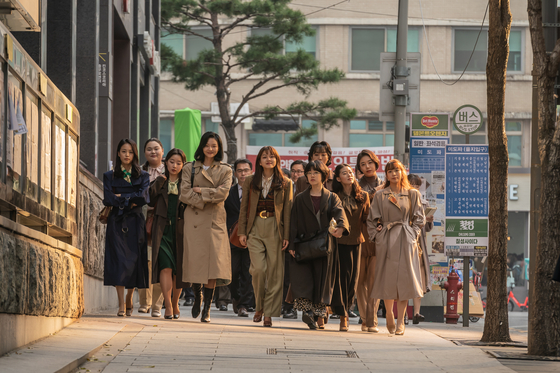 A scene from upcoming film "Samjin Company English Class" where the female protagonists resolve a case of massive corruption in their company. [LOTTE ENTERTAINMENT]

“Even a worm will turn.”

Some of the simplest English sentences and idioms were in fact the main message behind upcoming film “Samjin Company English Class.”

Actors Go Ah-sung, Lee Seom, and Park Hae-soo are the heroines. Despite being experts in terms of their working abilities after serving at a company called Samjin for eight years, the three female employees, Jayoung, Yuna and Boram, fail to win promotions due to their lack of university graduation diplomas.

The film is a mixture of mystery, drama and a touch of comedy as the three set about studying for the Test of English for International Communication (Toeic) to become deputy chiefs and reveal the truth about their company.

Director Lee Jong-pil said after the press screening on Monday, the film mostly takes on an optimistic tone—in correlation with the above-mentioned idioms, the ambitious, witty girls put their heads together to defeat the corruptive forces—showing that even a worm can turn when it’s stepped on.

The overall narrative is fast-paced but offers plenty of explanation for the audiences so they are not left in the dark. The film succeeds in weaving together the almost invisible employees with so much talent and determination who are set on receiving higher than 600 on their Toeic tests in order to be promoted. The three are also on a mission to expose corporate corruption involving the company which includes dumping massive amounts of toxins in a river used by the townspeople. Sounds complicated, but the film does a good job connecting the separate stories into one.

The retro makeup and styling is also eye-catching and perfectly brings out the individualities of each of the characters—especially the females—in the film. The girls come donning suits, vests, stripped collars, checked skirts, trench coats and colorful makeup that signify the '90s fashion that's currently back in style.

Although set in the early to mid-90s, the message of the film will still resonate with modern audiences, in particular younger people who are in the midst of deciding what career path to take. A particularly poignant moment is when Bo-ram admits to her boss that she doesn’t want to do anything with her life.

“But then won’t you be bored?... Just cross out the things that you don’t want to do, and don’t do them. Do anything else. Then you’re all right.”

Each of the characters has flaws but they comfort and encourage each other to not give up—just like they do not give up on learning English.

The time period in the film is set before the Asian financial crisis which director Lee said he purposefully avoided because he wanted his film to be about the times that were bright and sparkly to bring a little ray of sunshine to the audience amid the Covid-19 pandemic.

“I want the film to be sanguine—the kind where you enter the cinema on the first floor and when you come out, it feels like you’re on the second floor,” director Lee said.