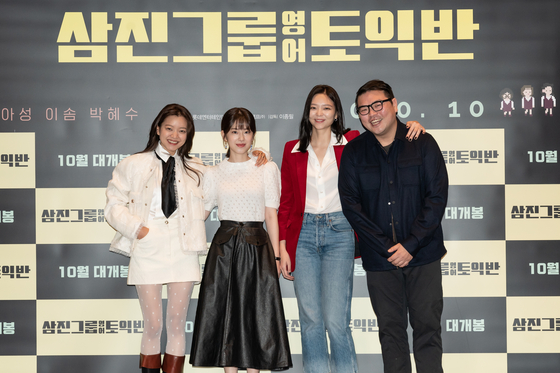 
As the retro trend continues to dominate Korea these days, lead actors Go Ah-sung, Lee Som and Park Hye-soo will take audiences to a corporate environment in the mid-90s in their upcoming film “Samjin Co. English Class.”

Despite being experts in terms of their working abilities after serving at a company called Samjin for eight years, the three female employees, Jayoung, Yuna and Boram, fail to win promotions due to their lack of university graduation diplomas. The film illustrates the three colleagues taking English classes together in hopes to win promotions, but while doing so they find out that the company is involved in some shady activities.

"It's a movie based on the real-life example during the globalization craze in the mid-1990s,” director Lee Jong-pil said during an online press event held on Monday. “That’s when the companies started emphasizing the importance of learning English and opened the Test of English for International Communication (Toeic) classes for their employees. The companies gave opportunities for promotion to high school graduates, who may have remained as rank-and-file-level workers, if they passed the Toeic exam.”

"Jayoung [played by Go Ah-sung] is an employee who wants to be a high-flying career woman, but in reality is treated like a coffee maker by her superiors," Go said. "Nineteen-ninety-five is when I was only 3 years old, so I don’t have many memories myself. But to those who have experienced that period, I think Jayoung will be familiar to those female office workers in the 90s.”

Actor Lee Som plays Yuna who works in the marketing department and whose creative ideas always get stolen by her superiors. Yuna’s hobby of reading detective novels also comes in handy when the three are solving the mystery behind the company.

Boram, played by actor Park Hye-soo, is a math genius who even won the International Mathematical Olympiad and yet remains in the lowest rank after eight years serving in the accounting department.

“Boram is a key figure in uncovering suspicions related to the company's corruption by taking the mathematical approach,” Park said.

In the film, the three portray characters who experience unfair treatment that female workers in the 90s had to go through in the workplace because of their educational background. But instead of getting intimidated in such a working environment, they play ambitious women who study hard to win the opportunity to get promoted by actively taking the English class.

“The three characters with three different charms are expected to present refreshing and cheerful energy to the viewers,” director Lee said. “While solving the mystery behind the company, the three actors will portray the story of growth in one’s workplace that anyone can relate to.”

“To recreate the ways we lived in the 90s, we tried to embody the costumes, settings, makeup, and songs of the 90s," director Lee added.

Actors Go and Lee agreed their favorite scene was on the morning commute, which is also the scene portrayed on the film’s poster.

“That scene really put me into a time machine as if I was time traveling into the alleys of Chungmuro in central Seoul,” Go said.

"For styling, I referenced the photos of my mother taken in the 90s,” actor Lee said. “In the movie, I look just like my mom in her youth. It felt so strange that I can't describe it in words."

The film is set to premiere next month.