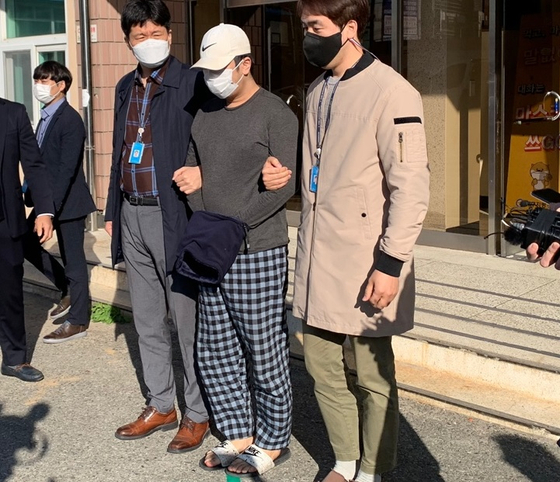 The operator of a now-defunct website that disclosed the identities and personal information of sex offenders and suspects, center, leaves the Daegu Metropolitan Police Agency Thursday morning to be referred to prosecutors. [KIM JUNG-SEOK]

The operator of a now-defunct website that disclosed the identities and personal information of sex offenders and suspects said Thursday he had started the controversial online page because he thought they deserved heavier sentences.

But as several allegations he posted on his “Digital Prison” website later turned out to be fake accusations, he said he realized he was “disqualified” to run the operation.

The suspect, whose name and age have been withheld by police, spoke briefly with local reporters as he left the Daegu Metropolitan Police Agency Thursday morning to be referred to prosecutors after police wrapped up their probe.

Asked what he had to say to the general public, the man replied he was “sorry for causing confusion.”

Created in June in the aftermath of the infamous “Nth room” digital pornography bust, Digital Prison listed private information on dozens of people it described as sex offenders, murderers and other criminals, including their pictures, ages and addresses — and even phone numbers and names of workplaces.

Some people on the website had already been convicted, while others had been identified as suspects.

The site had around 20,000 daily visitors who were allowed to leave comments on individual pages set up for the accused.

On Sept. 3, a 20-year-old Korea University student committed suicide after his personal information was posted on the website, which claimed he shared a doctored photo of his colleague photoshopped onto a pornographic image. The student denied the allegation on the school’s online forum before he took his own life.

He had never been charged by police for the accusation.

Soon after the student’s death, police tried to track down the operator but realized he was overseas and requested assistance from Interpol. The website was shut down on Sept. 8, presumably by the operator. He was arrested by Vietnamese police on Sept. 22 and repatriated to Korea on Oct. 6.

Daegu police said Thursday that the suspect confided he initially created the Instagram account “nbunbang” last March to upload the personal identities of sex offenders and suspects. But the account was deleted after complaints were filed with Instagram, prompting him to create the Digital Prison website.

On Sept. 11, three days after Digital Prison was shut down, it reopened, presumably by a different operator, who has yet to be apprehended. Daegu police vowed Thursday to focus on nabbing the second operator.