Jeong Jae-hong
The author is an international affairs and security editor of the JoongAng Ilbo.

North Korean leader Kim Jong-un expressed both gratitude and an apology to his people for economic hardships in a teary speech at a military parade celebrating the 75th anniversary of the founding of the Workers’ Party on Oct. 10. The address was carefully scripted to portray the young leader as a compassionate leader who worries about the woes the people went through as a result of international sanctions, Covid-19 and damage from flooding and typhoons.

Kim’s tears may have moved his own people, but they stoked doubts about his sincerity among outsiders. North Koreans are in dire straits because of his regime’s brutality. Kim and his inner circle maintain the world’s strongest dictatorship. Minimum freedoms and rights are not permitted. If anyone speaks their true thoughts, that person would be thrown into a prison camp. The people exist to sustain the Kim Jong-un regime. Period.

International sanctions impoverishing the economy stem from Kim’s greed and hunger for power. Kim pursued nuclear and missile programs as a kind of magic sword to protect his regime. The outside world mounted sanctions to stop those programs. Nuclear and missile programs are a desperate means to ensure permanency of a dictatorship at the expense of the well-being and livelihoods of the people. He is no different from a crocodile who sheds tears before gobbling up its prey, since he is the source of his people’s hardship.

In the book “Why Nations Fail: The Origins of Power, Prosperity and Poverty” by M.I.T. economics professor Daron Acemoglu and Harvard University political science professor James Robinson, North Korea is cited as an example of a failed state. North Korea was on par with South Korea in development when the peninsula was freed from Japanese colonial rule in 1945. The North stayed impoverished while the South grew into a G20 country. The Kim dynasty was engrossed in sustaining its dictatorship instead of tending to the lives of the people. The Kim dynasty kept a reign of terror over the people because it feared freedoms and improved living standards could threaten its control. 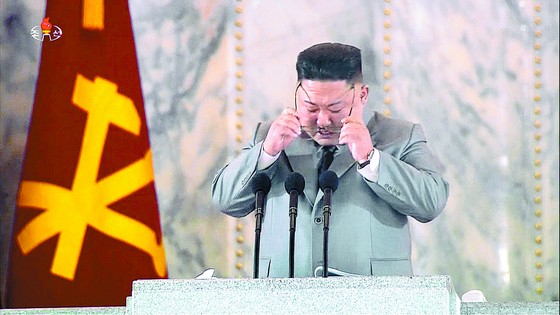 North Korean leader Kim Jong-un shed tears on the 75th anniversary of the founding of the Workers’ Party on Oct. 10. [AP/YONHAP]

A day after his teary speech, Kim called for an “80-day battle” to combat economic woes. His regime is out to squeeze what’s left from the hard lives of the masses to add to the national economy for the remainder of the year. But unrewarded toil cannot draw support. Mass campaigns achieve little. Kim’s regime resorts to old slogans because exploitation has become its habit. To stimulate the economy, political and economic rights should be enhanced. But in fear of any threat to the regime, Kim presses harder with exploitative governance.

Kim’s outreach to the South in the speech also did not sound convincing. The North Korean military gunned down a South Korean fisheries official last month and burned his body. If he had really cared for the people in the South, Kim should have ordered an investigation into the affair and punish those accountable. Despite his feigning of compassion, he has not taken any responsible actions to punish and correct the horrid deed that outraged South Koreans.

The Moon Jae-in administration has not taken any stern action to the murder and only reiterates hopes for improved bilateral ties. In a statement, the Blue House said Kim’s reconciliatory message could suggest North Korea’s desire to improve relations. Moon maintains that the two Koreas should declare an end to the Korean War regardless of any developments in North Korea’s denuclearization.

He was neglecting the escalating North Korean threat. North Korea trotted out an advanced intercontinental ballistic missile and a submarine-launched ballistic missile in its latest military parade. It sent a clear message that North Korea could precisely hit the South anywhere, anytime. A country’s leader should put top priority on defending the nation and people’s livelihoods. Clinging to talks when people’s livelihoods are at risk from nuclear missiles is denial of the reality. Moon must pay heed to North Korea’s arms, not deceiving words from Kim.