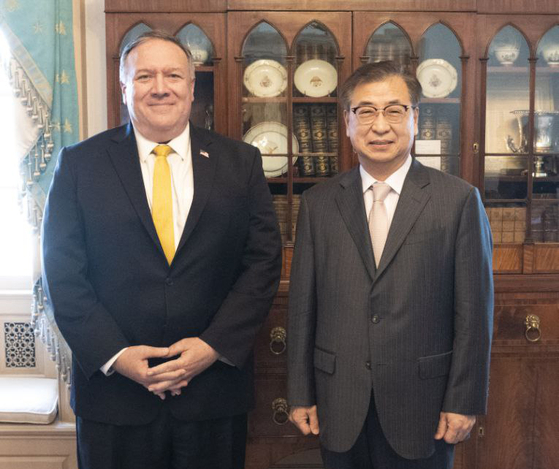 Suh Hoon, director of the National Security Office of the Blue House, right, meets with U.S. Secretary of State Mike Pompeo in Washington on Thursday. [YONHAP]


Suh Hoon, director of the Blue House’s National Security Office, said Thursday that President Moon Jae-in’s proposal to formally end the Korean War is part of the process to denuclearize North Korea, dismissing speculation that Seoul and Washington are at odds over the initiative.

“It is common sense that the end-of-war declaration cannot be separated from [the denuclearization process],” Suh said during a meeting with reporters in Washington, following his meeting with U.S. Secretary of State Mike Pompeo.

“Pushing for the end-of-war declaration is not a new issue [...] It has always been on the negotiation table, and Korea and the United States cannot have different opinions on it.”

He noted, however, that the issue was not specifically addressed during his U.S. trip.

“What is important is whether the end-of-war declaration comes first or after denuclearization,” Suh said. “And how strongly it will be linked to the denuclearization process. It is better not to speculate too much.”

Suh’s visit comes as cracks in the two countries' alliance have emerged over ongoing disagreements over security and key foreign policy ventures.

Despite a lack of alacrity from Washington, President Moon has repeatedly pushed for a formal declaration to end the 1950-53 Korean War as a means to revive deadlocked negotiations between Washington and Pyongyang over the latter’s nuclear program.

The idea was agreed upon by the two Koreas at their first summit in 2018, but progress toward such a declaration was halted due to a collapse in nuclear talks and Washington’s aversion to dealing with the North prior to major steps toward ending nuclear programs of Pyongyang.

Suh rejected speculation that his visit was to push for the venture and to create momentum to resume inter-Korean talks ahead of the Nov. 3 U.S. presidential election.

“Korea-U.S. relations must continue, regardless of the election outcome,” Suh said. “I won’t say my visit was specially arranged for the presidential election.”


Suh visited the United States on Oct. 13. During his stay, he met with Pompeo as well as his White House counterpart, Robert O'Brien. He is scheduled to arrive back in Seoul late Friday.