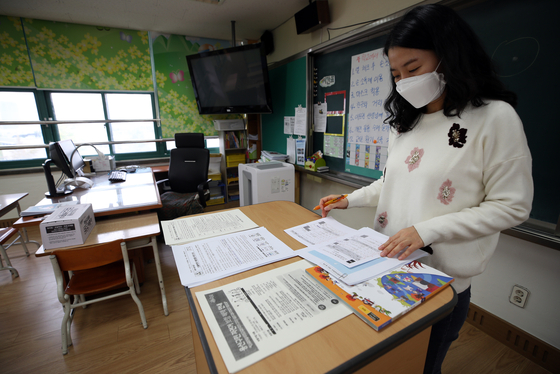 A teacher prepares for class at Itaewon Elementary School on Friday. Starting Monday, kindergartens, elementary and middle schools throughout the country, which have been allowing only one-third of the student body to be present in school at a time, will allow up to two-thirds of students to return. [YONHAP]

Of the total, 41 of the new cases were domestic infections, the Korea Disease Control and Prevention Agency (KDCA) announced Friday, bringing the total caseload to 25,035. Seventeen were confirmed in Seoul, 15 in Gyeonggi and four in Incheon.

Thursday's figure is the lowest since 38 cases were reported on Sept. 29, which was also the last time the daily tally of infections dropped below the 50 mark. It also represented a significant drop from the 110 new cases reported a day earlier.

The decline comes as the government has recently eased its social distancing restrictions, which dropped from Level 2 to Level 1 on Monday, the lowest in the three-tier system.

Meanwhile, the Busan Metropolitan Government said Friday that five new cases were detected as part of a cluster infection at Haeddeurak, a hospital for senior citizens. According to Busan officials, 58 cases had been confirmed at the hospital as of Friday.

The hospital was placed under cohort isolation on Wednesday.

The city government said it has administered tests at six hospitals for senior citizens and at a nursing home in Buk District, where Haeddeurak is located. No infections were confirmed, the city said.

Nationwide, two people died from Covid-19 on Thursday, raising the death toll to 441, according to the KDCA. As of Friday, the fatality rate was 1.76 percent.

The total number of people released from quarantine after making full recoveries was 23,180, up 98 from the previous day. According to the authorities, 1,414 people remain isolated for treatment.