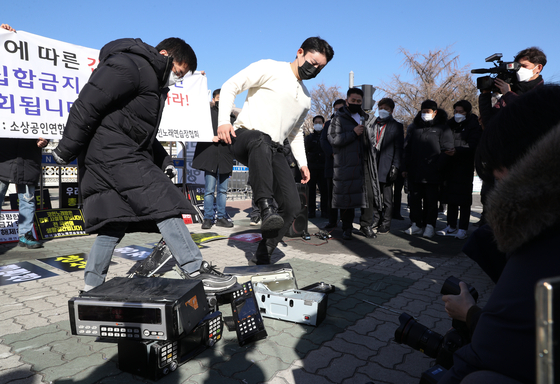 In front of the National Assembly on Wednesday, owners of coin noraebang, or booth-type singing rooms, stage a press event at which they destroy singing room equipment to protest the government’s social distancing measures. They pledged they will not obey any shutdown order after Jan. 18. [NEWS1]


Health officials on Wednesday were optimistic about a downward trend in daily Covid-19 cases, noting the peak may have passed in the virus's third wave in Korea.

A total of 840 people tested positive for the coronavirus Tuesday, up from the 715 from the day before and below 1,000 for a second consecutive day.

Yoon Tae-ho, head of disease control for the Central Disaster Management Headquarters, called the trend “a period of steady decline from a peak,” crediting the dropping numbers to the government’s social distancing measures.

“But given just how widely spread infections have been in regional communities, the decline going forward is expected to be slower and steadier,” Yoon said.

Citing mobile phone records, Yoon noted the heightened restrictions led to significant declines in people’s movements around the country. The greater capital area recorded around 22 million cases of movements this past weekend, down 37.7 percent compared to the last weekend before Level 2.5 was implemented, on Nov. 14 to 15.

Though new infections are decreasing, the number of people in critical condition reached a record number on Wednesday, at 411 cases. A total of 20 new fatalities were also reported, putting the total death toll at 1,027, and slightly ticking up the mortality rate of the virus to 1.56 percent. 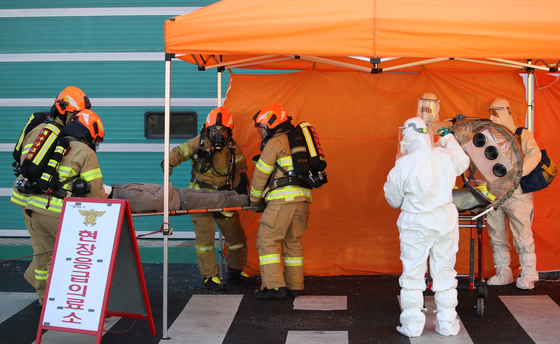 
Deaths spiked over December and into this month in tandem with soaring cases, with deaths recorded in the double digits almost every day since mid-December. A majority of the victims — 55.6 percent — were over 80, while fatalities decreased drastically by age.

Among 840 people who were diagnosed with the virus Monday, 809 were due to domestic transmission while 31 others were infected abroad, according to data from the Korea Disease Control and Prevention Agency (KDCA).

To pre-empt an influx of a new and more infectious coronavirus variant from Britain, from Friday onwards all foreigners who enter Korea must submit medical forms from their country of departure verifying they have received a PCR test and did not have the virus.

New domestic hotspots flaring up around the country, meanwhile, continue to present major headaches for officials.

A total of 60 new cases were added to the case count at the Seoul Dongbu Detention Center on Wednesday, which so far has produced 1,161 infections among inmates and workers.

Church gatherings, which have constantly poked holes in disease control efforts since the onset of the pandemic in Korea, continue to emerge as clusters. A mass service held at a Christian center in Seosan, South Chungcheong, on Dec. 31 in violation of social distancing rules, has so far produced around 200 infections.