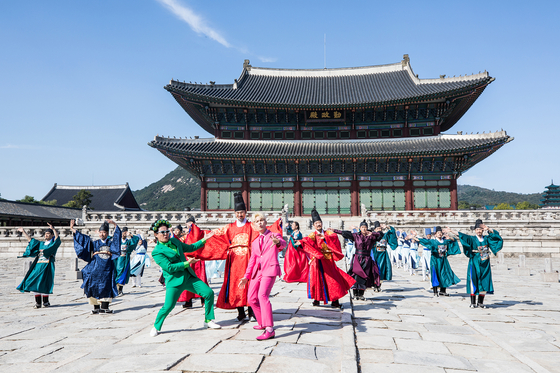 
When it comes to promoting the country’s tradition and culture, the Korean government goes all out.

It allowed K-pop act BTS to jump up and down on a state-designated treasure and gave the green light for a 275-ton crane to enter a royal palace that’s usually managed under strict regulations and restrictions for protection and preservation.

BTS performed its single “Mikrokosmos” at a floating banquet hall in Gyeongbok Palace known as the Gyeonghoeru Pavilion (National Treasure No. 224), which was aired earlier this month during the BTS Week special on NBC’s “The Tonight Show Starring Jimmy Fallon.”

A few weeks after, a large crane unprecedentedly entered the palace and approached the pavilion to stage a one-hour traditional performance of “Gyeonghoeru Fantasy — Royal Lotus Flower,” which is a media art and pansori (traditional narrative singing) performance telling the famous folk tale of “Shimcheong.” 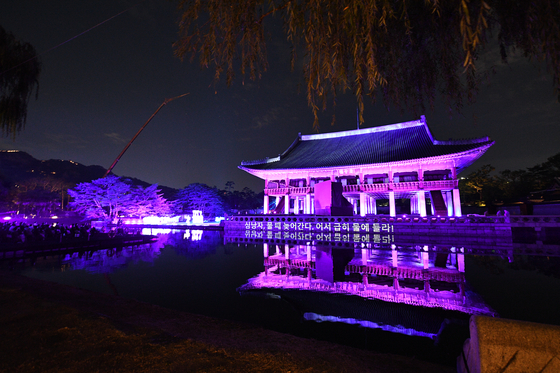 "Gyeonghoeru Fantasy - Royal Lotus Flower" is a media art and pansori (traditional narrative singing) show performed at the Gyeonghoeru Pavilion inside the Gyeongbok Palace, central Seoul. A large crane allowed dancers to stage an aerial dance show. The offline shows came to an end on Saturday, but it can still be watched online. [KOREA CULTURAL HERITAGE FOUNDATION]


Using the crane with an arm length of 70 meters (230 feet), it allowed dancers of the performance to fly up and down the pavilion, making audiences' jaws drop.

The “Gyeonghoeru Fantasy — Royal Lotus Flower” is in fact part of this year’s program entitled the Royal Culture Festival, an annual event that the Cultural Heritage Administration (CHA) together with the Korea Cultural Heritage Foundation launched to promote Korea’s royal palaces and its culture.

For this year’s festival, which kicked off on Oct. 10 and runs until Nov. 8, the government has organized both online and offline programs so that people can still enjoy the festival amid the coronavirus pandemic.

In Seoul, there are five palaces from the Joseon Dynasty (1392-1910) — Gyeongbok, Changdeok, Changgyeong, Deoksu and Gyeonghui.

This sixth edition of the festival sheds light on four of the palaces — it excludes Gyeonghui Palace as it’s managed by the Seoul Metropolitan Government while the rest are overseen by CHA — and the Jongmyo Shrine. Most of the offline events were held during the first week of the festival, admitting only a limited number of people at a time to abide by social distancing regulations. Most of the online programs begin Monday.

"Many festivals were scrapped this year as people are encouraged to stick to social distancing rules to prevent the spread of the coronavirus,” said Joo Jae-yeon, director of the festival. “We hope to suggest a way to survive amid the pandemic and will share this knowledge with other festival organizers.”

One of the most interesting programs launched this year for at-home attendees is the “Royal Culture Festival: Delivered to your doorstep.” 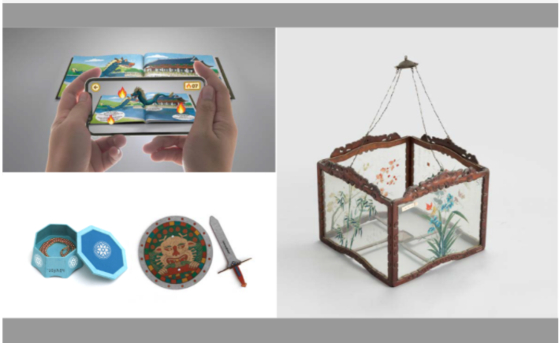 D.I.Y. kit of the "Royal Culture Festival: Delivered to your Doorstep." [SCREEN CAPTURE]


By signing up for a delivery service online at the festival’s official website (www.royalculturefestival.org), people can receive a festival kit that includes D.I.Y. crafts that allow you to make Joseon royal lanterns and a royal jewelry box using hanji (Korean traditional paper).

"Hyomyeong" is a three-series musical drama paying homage to Crown Prince Hyomyeong who had a high regard for art and music. The performance includes a reenactment of Jinjakrye, which is a ceremony created by the crown prince himself to commemorate his mother.

"Jeongjo" is a four-series show telling the story of King Yeongjo, his son Crown Prince Sado, daughter-in-law Lady Hyegyeong and grandson Jeongjo. Held at Changgyeong Palace, the musical drama tells the royal family's story from diverse perspectives. The video will be available from Oct. 20 to 23.

The organizers also prepared a special online program for this year by inviting artists from various genres to perform at different palaces that they can relate to. 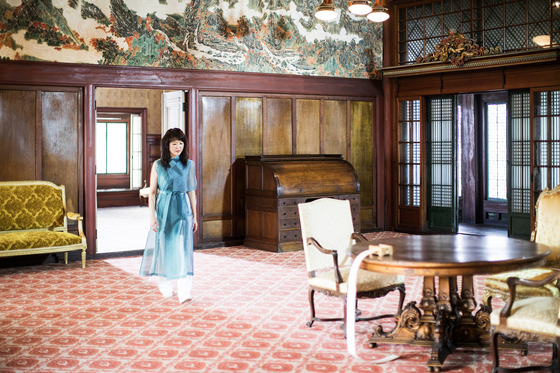 Already up is Ahn’s performance of “sacheolga,” or the “Song of Four Seasons” at Changdeok Palace.

"This is not a one-off event. We plan to film more videos with Korea's best-known artists in the future," Joo said.

Visitors can also learn about traditional medicinal ingredients and Korean medicine through the “Royal Healing, Changdeok Palace Pharmacy” program, which is available both online and offline.

Offline visitors can have a go at making herbal teas that will strengthen their metabolism. But for those who can’t visit the palace in person, celebrities including actor David McInnis, Park Eun-hye and choreographer Bae Yoon-jeong will share videos of themselves learning about Korean medicine on the festival's YouTube channel.

There are offline programs still available until the end of the festival for those who want to get out and visit the palaces and the shrine in person.

The famous “Changdeok Palace Moonlight Tour” will be available until Oct. 25 where visitors can tour around the grand palace at night with traditional lanterns in their hands.

At Deoksu Palace, there’s an exhibition in the Deokhongjeon Hall, where visitors can witness the transformation of Korean weddings after Western influences. Titled “Modern Marriage: Hip and Hitched,” the exhibit walks the visitors through how Korea began to adopt Western-style weddings, holding wedding ceremonies in wedding halls, churches and famous restaurants instead of the bride’s home.

“It was around the end of 19th century when Korea began to adopt Western-style wedding ceremonies, wearing a mix of hanbok [traditional Korean dress] and Western wedding gowns,” said Seo Young-hee, curator of the exhibit. “It was 1930 when Korea opened its first wedding hall and couples, especially those from rich families, began to hold weddings in such venues instead of traditionally. For honeymoons, they got into a wedding car and drove around the town.”

There’s also a media art installation available in Changgyeong Palace. Starting from 7 p.m. every evening, visitors who made reservations in advance through Naver can take a tour through this route toward Chundangji, the two beautiful ponds inside the palace. The tour is free but reservation is a must to regulate the number of visitors.

There’s also a special program for children. According to the organizers, they featured the Joseon Dynasty in the popular game Minecraft, so that children can learn about Korea’s history and culture while playing the game.

“Children can tour the Gyeongbok Palace as they play this game and challenge themselves in creating their own Gyeonghoeru Pavilion,” said Cho Hyeong-jae, the festival’s performance director.