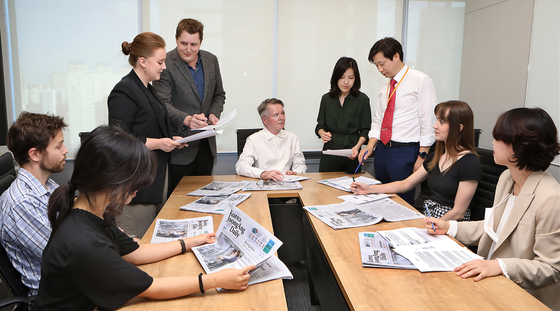 On Oct. 17, the Korea JoongAng Daily celebrates its 20th anniversary, the traditional coming of age in Korea.

To mark the anniversary, we have made some big changes to the Korea JoongAng Daily. We redesigned our pages early this year to offer a more modern look. We introduced a new nameplate or masthead.

Another major project was the launch of a mobile news platform with Naver, the country’s largest internet portal. Out of more than 50 applicants to be added to Naver’s list of content providers this year, the Korea JoongAng Daily was the only media company chosen.

Twenty years may seem short, but they were filled with many firsts, lots of hard work — and a succession of news stories that made an impact around the globe. We were honored with two awards from the Society of Publishers in Asia for our stories.

In 2000, the JoongAng Ilbo, one of Korea’s largest media groups, launched an English-language edition with the idea of amplifying Korea’s voice in the world. The International Herald Tribune (IHT), published jointly by The New York Times and the Washington Post at the time, was our publishing partner.

It was the first global-local collaboration between newspapers in Asia. The IHT gave readers the global news while the Korea JoongAng Daily covered the Korean news. The pair of daily newspapers was delivered to doorsteps of readers’ homes and to their offices in Korea. The first edition was published Oct. 17, 2000.

Though Korea’s prestige on the international stage had been rising with its economic importance and its evolution from dictatorship to democracy, there were few English media outlets offering a Korean voice to the world. That was the reason the Korea JoongAng Daily was born.

From the start, the Korea JoongAng Daily has offered its readers independent, credible and fair coverage of the news, differentiating itself from a media that often takes sides, or is pro- or anti-government.

At the beginning, it was a black-and-white, eight-page newspaper, offering English-language content from its mother paper, the JoongAng Ilbo. Its original name: the JoongAng Ilbo English Edition.

One of its key objectives was offering translations of editorials and columns from the JoongAng Ilbo, creating a window for foreign readers to keep up with the opinions of Korea’s foremost thought leaders.

After two years, the paper changed its name to the JoongAng Daily to emphasize a greater independence. It strengthened its news and feature story teams.

In 2006, we expanded from eight to 12 pages to accommodate reader requests for a wider range of coverage.

On its 10th anniversary in 2010, the paper relaunched itself as the Korea JoongAng Daily and pronounced a new mission statement to readers: to be “Your window to Korea.”

Our partner, the IHT, also went through major changes. In 2003, The New York Times became its sole owner.

We produced The Villager, the International Olympic Committee’s official newspaper for athletes, during the Olympics and Paralympics from Feb. 8 until March 18. Our reporters and photographers covered major events, interviewed athletes and coaches, and reported news from the athletes’ villages. The Villager gained a fond following among readers for its unconventional layout and amusing stories.

The Korea JoongAng Daily is also a valuable communication channel between the expatriate community and Korean society as a whole.
Since 2007, the Korea JoongAng Daily has been hosting the annual Korean Economic Forum to help foreign businessmen and diplomats understand the central government’s economic and financial policies.

The newspaper has run a succession of series focusing on ambassadors stationed in Seoul since 2015. In different formats, we have invited the envoys, their spouses and Koreans familiar with the diplomats’ home countries to get together for meals and discuss various topics. This has established a strong connection between the newspaper and the diplomatic community in Korea.

In 2017, we organized a Public Diplomacy Night, which became an annual event. Ambassadors and their spouses are invited to celebrate the important role they play in introducing their countries to the Korean public.

In 2016, Rotary International signed a memorandum of understanding with the Korea JoongAng Daily to cover the Rotary World Congress in Ilsan, Gyeonggi.

In 2019, the International Bar Association designated the Korea JoongAng Daily as its English-language media partner to cover its annual convention at Coex in southern Seoul.

All the achievements were possible thanks to our dedicated staff.

At the Korea JoongAng Daily, editors from around the world polish stories written by bilingual Korean staff reporters. For the past two decades, about 100 foreign editors have worked with over 80 staff reporters.

Former TIME Magazine senior editor Anthony Spaeth has led the newsroom for ten years, half the history of the paper. Spaeth first visited Korea in 1977 and covered the so-called Miracle on the Han in the 1980s. The next chapters may be the most dramatic for the nation and the English-language daily that covers it.

Yeosu residents pay for boom with their wallets