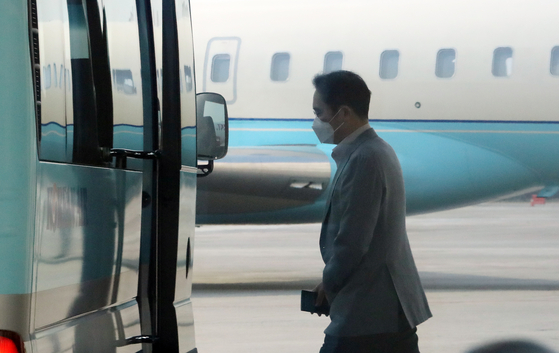 
Samsung Electronics Vice Chairman Lee Jae-yong flew to Vietnam on Monday to meet with the Vietnamese prime minister following his visit to the Netherlands last week.

Lee is set to have a meeting with Prime Minister Nguyen Xuan Phuc on Tuesday, although the agenda of the meeting has not been disclosed.

Vietnam is home to two of Samsung’s smartphone plants, an appliance factory and a research and development (R&D) center.

This is the third time the two have met. The prime minister has said that the commitment of Samsung Electronics to the country in terms of investment should be increased. He has asked Samsung to build a semiconductor factory, according to media reports.

Lee may also travel to the site of a new R&D center in Hanoi, Vietnam, that broke ground earlier this year. He was scheduled to attend a groundbreaking ceremony in February, but the event was canceled due to the pandemic.

Lee’s visit became made possible as the Vietnamese government has loosened border restriction as the number of infections in the country and in some other countries has been low.